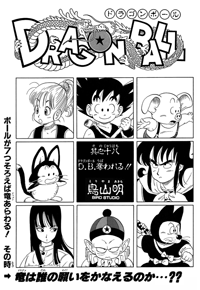 The Dragon Balls Are Stolen!!

Bulma, Oolong, and Goku continue driving along through a desert filled with giant mushrooms. Oolong asks Bulma what she wants to wish for. She says a dreamy boyfriend, which irks Oolong that they’re risking their lives for such a thing. Meanwhile, a tall woman with long black hair is standing on top of one of the mushrooms. She radioes to “Pilaf-sama” that she’s at point Ho-15. There’s one car coming, and Pilaf, her apparent boss, says “they” must be in that car. The woman is told to execute the plan. She asks “Soba” if he can see the car, and a voice over the radio replies that he can. She tells him that they’re the ones holding the Dragon Balls.

Oolong and Bulma continue to argue over the worth of her intended wish, when suddenly their car is struck and sent careening into a giant mushroom, where it explodes. The three are thrown off to the side, and a mech hops over to the car’s remains. Piloting the mech is Soba, a dog in a ninja suit, who begins looking for the Dragon Balls in the wreckage. He soon finds the suitcase with them in it and blasts off, payload in tow. Bulma yells at Goku to catch him, and so he calls for Kinto-Un and flies off in pursuit.

Goku stumbles upon the now empty mech and yells at it. There’s no response, so he taps it with Nyoi-Bō and it falls over. Goku assumes it must be dead, and very weak. Bulma thinks the thief must’ve known about the Dragon Balls, and Oolong thinks they should just give up. He tells Bulma he would be her boyfriend, and she yells at him. Goku returns, saying he defeated him, but the Dragon Balls weren’t there. Bulma cries about those people collecting all seven, and this being the end, until Goku points out that he still has the Four-Star Ball. Bulma then arrogantly laughs about them forgetting one, and declares that they’ll use the Dragon Radar to find the thieves’ location. Oolong points out that the car is destroyed, and Bulma remembers that the capsules were in the briefcase with the Dragon Balls. Pu’er and Yamcha notice that they’ve lost their Dragon Balls, and decide they’ve no choice but to help again. They pull over in their car, and Bulma is very excited to see Yamcha-sama.

Soba and the woman are driving along to take the Dragon Balls back to “Pilaf-sama“, so he can rule the world. Meanwhile, Oolong is glad that Yamcha came along, and Yamcha says it was completely by chance. However, when Bulma starts cuddling up against him, he nearly crashes the car.

Meanwhile, inside a big castle, Soba and the woman are apologizing to Pilaf, a tiny man with pointy ears, for only getting six. Fortunately for them, he’s not that angry, as the seventh ball is on its way to them already. The woman then notices that “they” have arrived on the security monitor, and Pilaf thinks “they” must also have a radar of some sort to have arrived so soon.

Everyone is standing outside of the castle, and Goku’s impressed at the size, while Pu’er is worried about Yamcha-sama after his reaction to Bulma. They head inside, and creep quietly along the brick walls, until Goku spots some arrows on the floor pointing the way. They decided to follow along, until they come to a dead end. A wall drops behind them, so they’re now trapped in a tiny room. Pilaf can’t believe they fell for such a dumb trap. 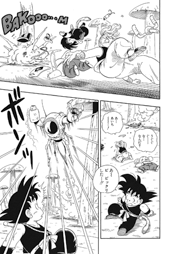 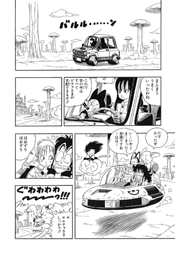 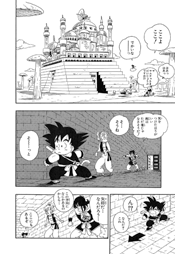