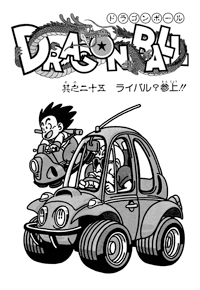 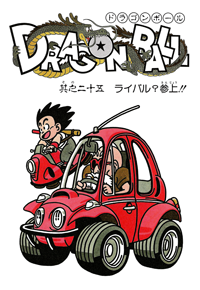 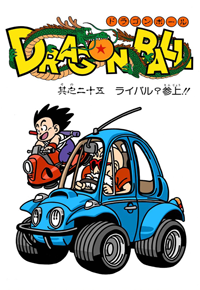 Goku comes back again, this time with a very cute girl on Kinto-Un. Kame-Sen’nin spots her, and gets excited, and calls Goku aside. Kame-Sen’nin tells him that since he did so well, he’ll train him. He’ll start right away. First, Goku must go get that girl’s panties; that’s the best way to begin training. Goku doesn’t know what that is, but goes anyway, and comes back and asks what a “shirt” is. Kame-Sen’nin thinks he blew it, since he’s empty-handed, but Goku explains how she said all she has is her one shirt, no “panties”. After Kame-Sen’nin wipes away his nosebleed, he decides he’ll go over there himself. Kame-Sen’nin walks over to see her but falls down, as he notices she’s a mermaid. Once he regains his composure, he asks if he can play with her breasts. She then proceeds to slug him and hops in the ocean, swimming away.

Goku says he gets it now, panchī (“panties”) means panchi (“punch”). Kame-Sen’nin says that he wants Goku to go look for a girl again, but this time he wants one doesn’t have a fish as it’s lower half. Kame-Sen’nin thinks this is great; while that fussy Umigame is off traveling, he mustn’t let this rare chance slip away. Goku spots something, and Kame-Sen’nin worries that Umigame has returned to ruin his opportunity. He sees that it’s just a boat and there’s a little bald kid with no nose dressed like a monk in it. The bald kid jumps out of the boat all the way over to the island’s shore, flipping a few times mid-air, and then finally lands in the sand head first. After Goku pulls him out, the bald kid dusts himself off and asks for Muten Rōshi. He explains that he his name is Kuririn and he has come from a village in the far East to train under Muten Rōshi. Kame-Sen’nin is reluctant to train him, but he reconsiders once Kuririn pulls a porn magazine out of his bag.

Kuririn then looks at Goku and asks if he’s a student. Goku says he is and introduces himself as “Son Goku!!” Kuririn doesn’t think he looks like he’s good at budō (“martial arts”), and Goku says he likes budō (“grapes”). Kuririn asks if that was supposed to be a pun and Goku says his head looks like a pachinko ball. Kuririn yells that those who aspire to use martial artists shave their heads, and points at Muten Rōshi, who peeks up from his magazine and says he’s naturally bald. Kame-Sen’nin then asks Kuririn if he knows what kind of gals he likes, and he does, so he tells Kuririn to get on Kinto-Un with Goku. Kuririn wonders about this cloud, and then jumps up, and falls through. Kame-Sen’nin thinks he must have impure intentions, but Kuririn says he wants to get stronger at fighting so he’ll be more popular with girls. Kame-Sen’nin says that could be considered impure. 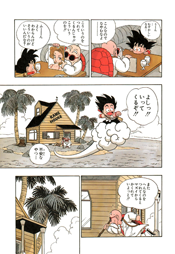 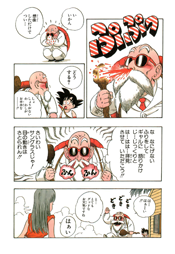 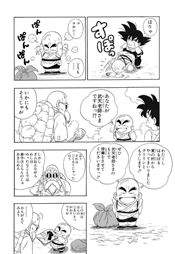