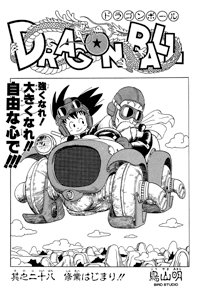 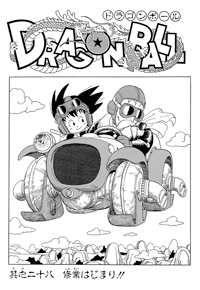 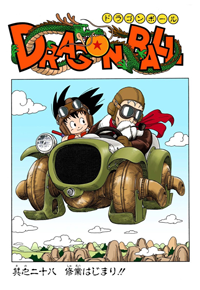 Kame-Sen’nin announces to everyone that they’re going to move to a larger island for their training. After everyone is finally outside, Kame-Sen’nin puts Kame House in a capsule. Goku thinks they should travel using Kinto-Un, but Kame-Sen’nin says they’ll go by boat instead. The four of them hop into a hovercraft, and Kame-Sen’nin tells Lunch not to sneeze. When they arrive at the island, Kame-Sen’nin says they’ll try until dinner, but Goku has already hopped on Kinto-Un to takes an aerial look at the island. He finally comes back and reports that there are other houses on the island. Kame-Sen’nin says there are three hundred people living here. Lunch wonders what she should do while everyone else is training. Kame-Sen’nin tells her to do as she likes, and so she decides to prepare dinner. She suddenly looks as though she’s about to sneeze, and the boys freak out and run behind a rock. It turns out she was just yawning, and wishes them well while she makes dinner.

Before they start things, Kame-Sen’nin asks Kuririn if he knows anything about martial arts. Kuririn says he spent eight years at the Ōrin Temple training. Kame-Sen’nin decides he wants to see what their true strength. He wants to know how many seconds it’ll take them to run a hundred meters. Not for speed, but to test the solidity of their legs. Kuririn decides he’ll run it first with his Olympic-capable feet, and he clocks in at 10.4 seconds. Kuririn chuckles about his best being 10.1, and then Goku goes. Goku clocks in at 11 seconds, but asks if he can change his shoes and run again. Kuririn thinks he’s making excuses, since his shoes aren’t made for running either, but Goku shows that his are all broken (his toes are sticking out). With new shoes, Goku runs again, and clocks in at 8.5 seconds.

As Kame-Sen’nin takes his turtle shell off his back, he tells them they need to overcome the human barrier to become perfect martial artists. He then asks Kuririn to time him. Kame-Sen’nin runs it, and asks for his time, and Kuririn says 5.6 seconds. Kame-Sen’nin isn’t that impressed by the number, and puts his turtle shell back on. He figures that since they’re young, they should be able to easily beat five seconds, with training. Then he asks Goku to get him a beer, but Goku doesn’t know what that is, so Kuririn goes. Meanwhile, Kame-Sen’nin tells Goku he’ll also need intelligence in martial arts. Lunch sneezes while Kuririn is retrieving the beer, and chases him outside with a butcher knife. While hiding behind a rock, Kame-Sen’nin tells Goku that Kuririn is now really close to reaching the human barrier. 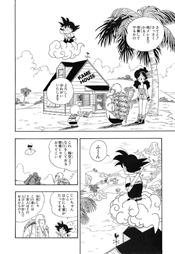 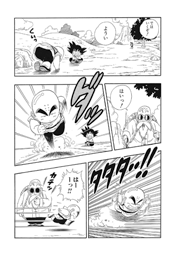 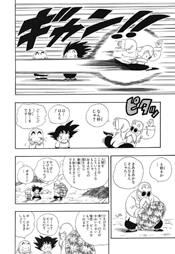