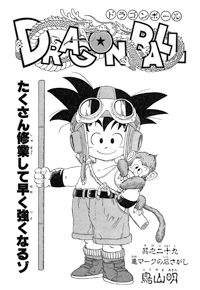 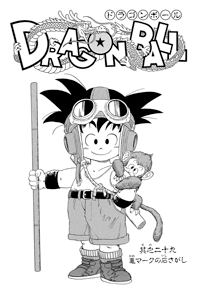 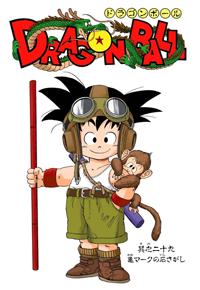 The Search for the Turtle-Marked Stone

It’s getting late, and Kame-Sen’nin decides he’s going to test the boys before dinner, but the serious training begins tomorrow. Goku asks if it’s more running, but Kame-Sen’nin says it’ll be more than just that. He picks up a stone, and draws the kame (“turtle”) kanji on it, and shows it to them. As Goku wonders what he’ll do with it, Kame-Sen’nin throws it off a cliff and down into the jungle. They wonder if it’s a test of stone throwing, but Kame-Sen’nin says it’s instead a test of stone searching. It’ll be good for the spirit, concentration, and physical strength. Besides, the loser won’t get dinner. Kame-Sen’nin tells them they have to hurry, since dinner is in thirty minutes. He tells them they’ll both end up without if they don’t find it soon, so the two quickly run off.

Goku and Kuririn stand over the edge of the cliff, and Kuririn worries about getting down there, but Goku just dives off towards the jungle below. Kuririn yells that he’s stupid, but Goku yells back that he used to do this all the time back in the mountains. He catches onto a tree branch, but it snaps and he falls to the ground. Goku quickly gets up darts off yelling, “Dinner, dinner!!”

Kuririn looks down, and wonders if Goku is human. He thinks that finding a little stone in the span of thirty minutes, in that jungle is almost impossible. So, he runs off and grabs a stone, goes to a lady’s house and borrows a pen. He draws the kame kanji on the stone and runs off. Meanwhile, Goku sniffs around the jungle looking for “Gramps” scent. Kuririn gets back to the house, pretending to be exhausted, and shows Kame-Sen’nin the stone. Kame-Sen’nin looks it over, then throws it back at Kuririn, hitting him in the head, and says it’s not his handwriting.

It’s getting darker, and Kuririn is down in the jungle. A saber-toothed tiger jumps out at Kuririn, who barely dodges, and elbows it in the back of the head, knocking it out. He hides behind a tree as a triceratops comes by. Kuririn recognizes Goku’s voice, yelling he’s found it! When he finds Goku, Kuririn thinks he must be a dog, to have found it by scent. Kuririn asks to see it to check if it’s real, and when Goku hands it over, Kuririn darts off. Goku gives chase and they run across a rope bridge, but Kuririn cuts the ropes off when he reaches the other side, causing Goku to fall to the ground.

Back on above the cliff, Goku still manages to gain on Kuririn, so Kuririn says they should fight. When the smoke clears, Kuririn is all beaten up, and he says he’ll concede. Instead, though, Kuririn tosses the stone off into the distance, and Goku runs off to find it. Poor Goku, it was the fake one, and Kuririn gives Kame-Sen’nin the real stone. So, Kame-Sen’nin, Lunch, and Kuririn all enjoy some nice fish while Goku miserably watches them. Luckily for Goku, Lunch had unknowingly cooked fugu, causing everyone who ate it to become very sick. “Afterwards, the training was halted for three days, so that the three of them besides Goku could rest for their sickness. The reason is because they ate fugu tonight…” 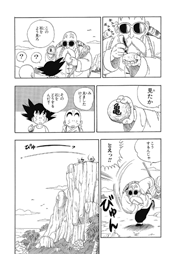 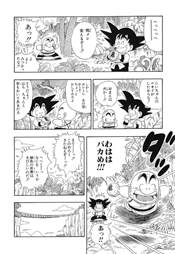 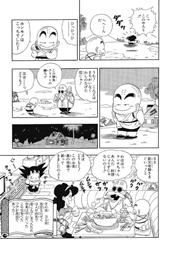