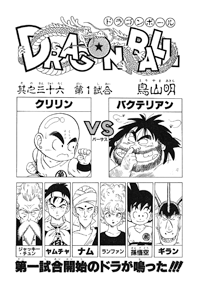 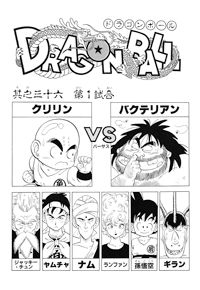 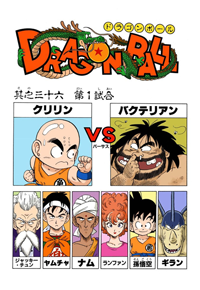 The first match is about to begin, and the announcer tells them that there will be a 500,000 Zenny prize for the winner of the tournament. He also says that before the first match begins, they will be a greeting from the superintendent priest of the Martial Arts Temple. A dog guy comes out, takes the microphone, says “Woof”, and leaves. Everyone falls over. It’s the beginning of the first match and both contestants make their entrances. Holding a rag to his nose, the announcer says that Kuririn is the youngest person to ever compete here at the age of thirteen, and that Bacterian has never bathed since the day he was born. He proceeds to go over the rules again, and calls for the match to begin.

They stare each other down, and Bacterian makes the first move by swiping at Kuririn, but Kuririn jumps out of the way. Bacterian quickly changes his strategy, and lets out some of his nasty, smelly breath on Kuririn. While Kuririn is still stumbling, Bacterian puts his hand down his shorts and shoves his nasty crotch-scented finger in Kuririn’s face. Kuririn falls down, seriously grossed out. By now, the announcer is wearing a gas mask, as is the guy doing the count down. We then get a glimpse of Toriyama-bot watching from the audience.

Bacterian farts in Kuririn’s face, then steps on him. At the count of eight, Goku tells Kuririn it’s all in his imagination, and reminds him he doesn’t have a nose, so Kuririn gets back up. Bacterian is now pissed that Kuririn doesn’t have a nose, so he hacks up a big loogie and starts spitting at Kuririn. Kuririn avoids the loogie’s, and kicks Bacterian in the face, knocking him down. Kuririn then promptly runs over and farts in his face. Bacterian concedes, giving Kuririn the win. 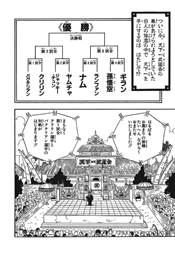 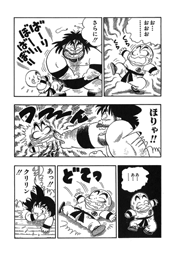 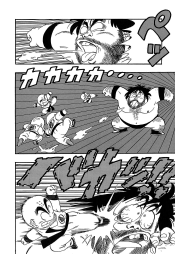