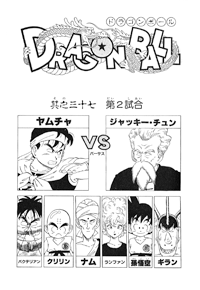 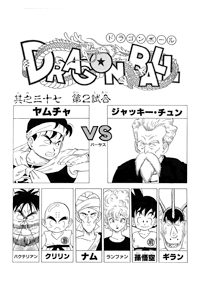 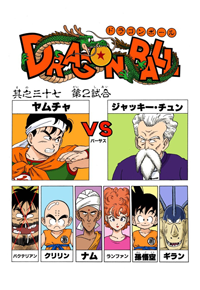 Goku congratulates Kuririn while the announcer declares the victory. The boys look in the audience for Muten Rōshi, but he’s not there. Bulma says he disappeared before the match started, and Kuririn wonders why he wouldn’t want to see their matches, but Goku says he smells him somewhere nearby. The second match is about to start, and the announcer tells Goku and Kuririn to head backstage and begins to introduce the next contestants. Yamcha heads out first, and Goku wishes him well. As Jackie heads towards the ring, he compliments Kuririn on his kicks.

The announcer introduces Yamcha to the crowd, and Bulma wonders what this Jackie Chun is like. Oolong brings up her boyfriend, but she says that’s no big deal. When she sees Jackie’s an old man, she goes back to cheering on Yamcha. Yamcha wonders about this old man, as the announcer calls for the match to begin. Jackie doesn’t move at all, so Yamcha flies at him with a punch, but misses. He kicks, and then swings at him, but Jackie keeps dodging it. Jackie says he’s making useless movements, and backstage Goku yells for Kuririn to come watch this awesome old man.

Yamcha intends to get serious now, while Kuririn asks Goku if this Yamcha person really is strong. Goku says he sure is, as he has also fought him. He tells Kuririn that he had a speed so great he couldn’t see him, and he was insanely strong. Yamcha uses his Rōga Fū-Fū Ken, but Jackie manages to jump out of the way. Everyone’s amazed, as Jackie back flips over towards Yamcha, and decides to give him some fresh wind as a present. He swipes his arm, and a gust of wind knocks Yamcha out of the ring. “It’s a ring out! Jackie Chun wins!” The announcer continues on about how strong Jackie is, while Yamcha and Kuririn can’t believe it. Kuririn’s more worried, since he has to fight the old man in the next round. 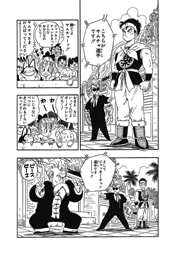 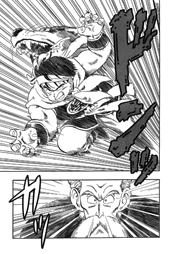 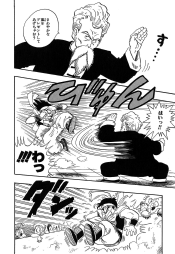