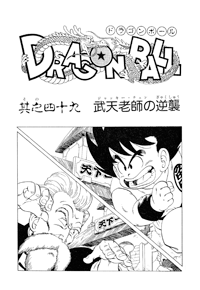 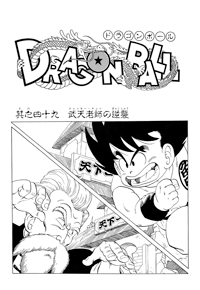 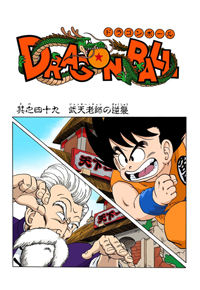 Jackie’s pissed, and wonders what he’ll do next as Goku scratches himself like a monkey. Jackie does a low kick, but Goku back flips out of the way. Jackie throws a few punches Goku’s way, but Goku keeps dodging him, then scratches his ass while making monkey noises. Jackie tries to grab Goku, but Goku jumps up out of the way and does a handstand on Jackie’s head. Jackie tries to kick him off, but Goku jumps behind Jackie, landing on all fours. Goku then leaps over Jackie, and Jackie tries to punch up at him, but misses. Goku lies on his belly, trips Jackie with his tail, and begins scratching at Jackie’s face. Jackie’s pissed at him for moving like a monkey and Goku says this is Saruken (distract and avoid technique).

Jackie decides to try something else, and tells Goku he’ll lose as he starts eerily waving his hands around. Jackie then starts chanting, while still doing the hand motions, and he’s lulling Goku to sleep. Goku falls over, sound asleep, and Jackie calls that technique Yoiko Min-Min Ken. The announcer thinks that was more like “hypnotism” than “martial arts”, but Jackie says to just hurry and count. Jackie thinks losing will be good for Goku, but at the count of nine, Bulma gets an idea. “Son-kun, it’s time to eat!!!!” Goku gets right up, frantically running around asking where the food is. Jackie can’t believe this. Goku asks the announcer where the food is, and the announcer says he can eat after the match.

Goku wants to end this now (so he can eat sooner), so he does a Jan-Ken Gū, then a Choki, then a Pā, but Jackie blocks all of them. Goku can’t believe this, and Jackie says he’s seen that Jan-Ken before. Goku’s surprised, since it’s supposed to be only Grandpa’s technique. So, Goku decides to try again, and Jackie just chuckles. Goku calls out Pā, but does a punch instead, knocking Jackie down. Jackie gets back up at the count of four, pissed at Goku for tricking him by saying Pā but doing Gū. 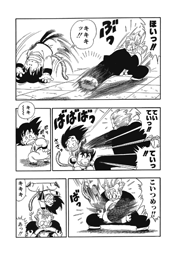 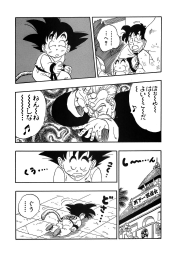 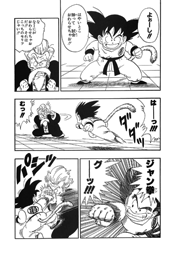