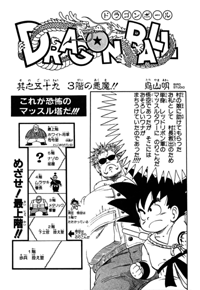 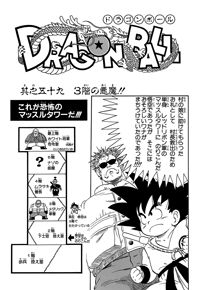 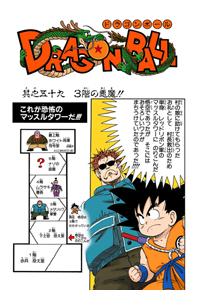 The Demon on the Third Floor!!

Goku is impressed with Metallic’s composure after taking that attack. Metallic then slams his foot down, and Goku just barely jumps up out of the way. While mid-air, Metallic punches Goku, and he bounces off the floor into the wall. Metallic comes over to finish him off, but Goku gets on his feet, and then jumps up and head butts Metallic in the chin. Metallic is knocked over, and Goku’s head really hurts (because Metallic has a “really hard face”). Metallic gets up again, and Goku tells him he should compete in the Tenka’ichi Budōkai.

Metallic suddenly fires a rocket from his mouth, and there’s an explosion, putting a hole in the wall. It seems Metallic has won, but Goku is safe behind a pillar. He thinks about the Kamehameha-looking thing that came from his mouth, and decides he’ll use his own Kamehameha. Goku shows himself, and launches his Kamehameha at Metallic. When the smoke clears, Metallic’s head is gone, with wires and stuff sticking up from his neck.

Goku thinks he’s done something bad, and claps and begins praying. But Metallic’s arm starts moving slowly, and his fist flies off like a rocket and hits Goku. The other fist then tries to punch Goku, then swats at him, but Goku dodges, and wonders what’s happened. White comes in over the PA system and says Sergeant Metallic is a robot, and so Goku decides to use his reserve strength. But suddenly, Metallic stops moving, and the ninja guy says his batteries have run out… Goku runs upstairs towards the fourth floor, as White yells at the ninja guy to go defend that floor. 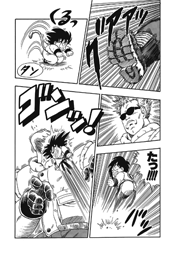 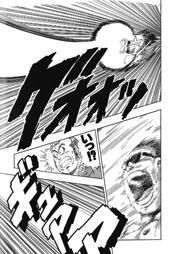 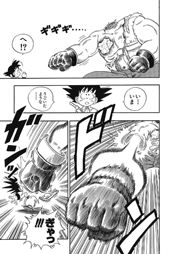