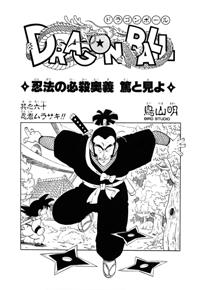 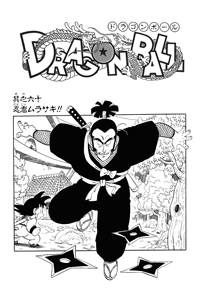 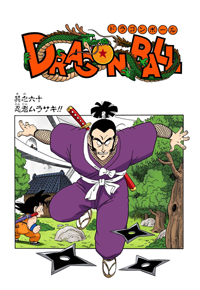 Goku keeps running upstairs, and he reaches the fourth floor. There’s a house here, along with grass on the ground and a small forest. Goku doesn’t understand why there’s an outside indoors. Suddenly, some kunai come flying at Goku, and he just manages to jump onto a rock and avoid them. A voice calls out (presumably the ninja guy, whom a narration box said is named Master Sergeant Murasaki), and tells Goku he’ll die here on the fourth floor.

Some shuriken come flying in, landing in the rock, while Goku ducks behind said rock. Goku realizes which direction they came from, so he picks up a stone and throws it into the trees. Direct hit, and Murasaki falls to the ground, with his face messed up. Murasaki says he was lucky, but Goku insists it wasn’t luck. Murasaki gets mad, and throws a smoke bomb at Goku. When the smoke clears, Murasaki is gone. Murasaki calls out that Goku won’t find him this time, as he’s using his Kakuremi no Jutsu. Goku walks through the forest, until he spots Murasaki holding the American flag over himself up against a tree. Murasaki is annoyed to find he used the wrong side, then flips the flag over to reveal a much better tree-patterned camouflage.

Now, Murasaki’s going to use a high level hiding technique, and tells Goku to count to thirty. Goku gets to eighteen, but doesn’t know what comes next. He turns around to ask, spotting Murasaki partially covered by a fake rock. Murasaki yells at him about how great hiding under this rock was going to be, and Goku agrees that it looks very real. Murasaki tells Goku it’s nineteen, then twenty, twenty-one, twenty-two, twenty-three… Murasaki hides again, and when Goku finishes counting, he can’t find him, until he hears something. Breathing noises coming from the pond near the house, and there’s a reed sticking up. A side-view panel reveals that Murasaki is hiding underwater, breathing through the reed. This is his famous Suiton no Jutsu. Goku looks at the breathing, then runs in the house and comes back with a steaming pot, and pours it down the reed. Murasaki’s tongue is burnt, and he is angry.

Murasaki is through with the hiding techniques, and wants to attack more directly. He then runs off through the trees, and calls Goku on, challenging him to match his ninja speed. Goku dashes after him, and when he nearly catches up, Murasaki throws some tacks on the ground. Goku steps on them, and it hurts, but he comes back with a pair of geta sandals, and he easily runs over the tacks. Goku then passes Murasaki, winning their race. Murasaki pants and tries to catch his breath, while Goku does a happy dance. White says that while Murasaki has power, his brains are… “To be continued.” 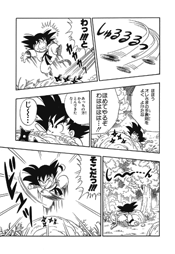 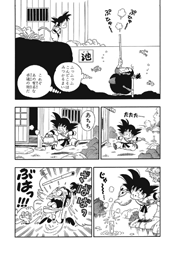 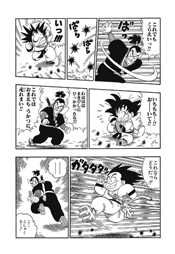