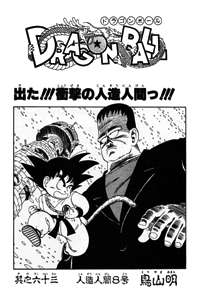 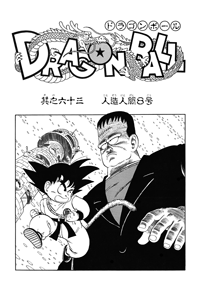 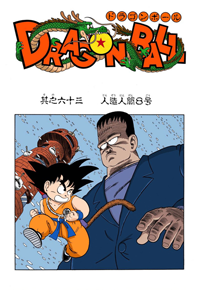 Murasaki opens the cage, and No. 8 comes out while Murasaki laughs about how strong he is. He tells No. 8 to kick the brat down and beat him to death, but No. 8 refuses. Murasaki yells at him, but No. 8 still refuses. Murasaki exclaims that the Red Ribbon Army created him, and can’t believe he would refuse to listen to the word of his parents. No. 8 insists he can’t, so Murasaki prepares to make him listen. He pulls a remote controller out of his shirt, and says there’s a bomb in his body, just for an instance like this. All he has to do is press the switch to make No. 8 blow up. Nevertheless, No. 8 insists he can’t do bad things. White thinks he’s a traitor and a failed creation, and yells at Murasaki to blow him up. So, Murasaki distances himself, and prepares to push the switch. But then Goku charges over, whacks the controller out of his hand, and smashes it. Goku then hits Murasaki with a Jan-Ken Gū, and Murasaki flies into the wall, knocked out.

Goku balances along the railing over towards No. 8, who thanks Goku. Goku tells him you have to fight bad guys, though it’s not good to kill them. No. 8 admits that he’s scared of fighting. No. 8 then asks him his name. “I’m Son Goku. You?” “I’m called Artificial Human No. 8.” Goku thinks that whatever-No. 8 is a weird name. No. 8 asks if he’s here to help the village mayor. Goku says yeah, and there’s no time to waste. No. 8 offers to lead the way to the highest floor, as thanks.

They head upstairs to a maze of a room, and Goku asks “Hatchan” if this is the fifth floor. No. 8 says this is between the fourth and fifth floors, and asks about “Hatchan”. Goku says whatever-No. 8 is too hard to say, and No. 8 likes that name. (Hachi is Japanese for “eight”, so Hatchan = “hachi” plus “-chan”.) They come to a flight of stairs, and as they ascend, Hatchan explains that through this wall is the fifth floor. It’s a secret room with no entrance, and even he doesn’t know what’s inside. And now at the top of the stairs is the highest floor, the sixth floor control room. Goku busts through the door, and demands that the mayor be returned. White congratulates him on making it this far and Hatchan insists that he give in. White says they’re the ones who should give in, and presses a button. Goku and Hatchan suddenly fall through the floor, into the secret room on the fifth floor… 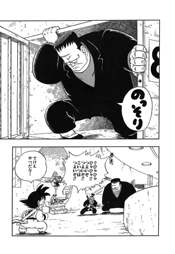 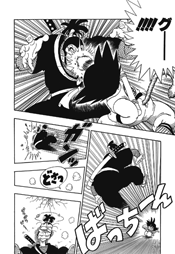 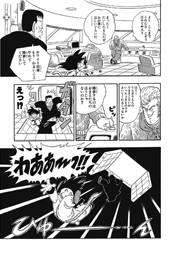