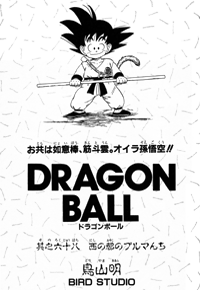 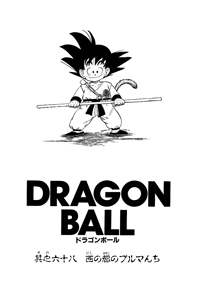 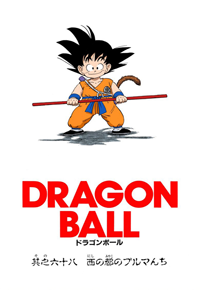 Nishi no Miyako no Buruma n’chi

Goku arrives in West City, impressed with its size and busyness. He hops off Kinto-Un, and starts wandering around. He ends up out in the middle of traffic where a guy in a car yells at him. Goku asks the guy where Bulma’s house is, but he doesn’t know (or care), and drives off. Then Goku asks a lady with a baby carriage where Bulma’s house is. She doesn’t know either, and she tells him to ask somebody else. Goku can’t believe that she doesn’t know even though they live in the same place. A taxi comes by, and Goku hails it down, and the driver tells him to hop in. The driver asks where to, and Goku says Bulma’s house, so the driver asks where that is. “I don’t know. I’m searching!” The driver halts the cab and asks if he has money for this, but Goku doesn’t, so the driver throws him out on the street. Goku realizes you need money to find out where someone’s house is in the city.

He notices a crowd has gathered, and a boxer guy is fighting people; if they defeat him, they get a 100,000 Zenny prize. Goku says he’ll fight, and the guy thinks he’s joking. Goku insists he isn’t, and the guy nonchalantly gives in as the crowd laughs. Goku starts by jabbing him in the stomach, sending the guy to the ground clutching his stomach. But the guy refuses to give up. Noticing the kid knows kenpō, the guy decides to get serious, and Goku jumps up and kicks the guy in the face. The guy’s angry now, and he swings at Goku, but Goku ducks it. Then the guy tries to come down at Goku, but Goku jumps up and kicks at him. He hits the brick wall instead of the guy’s face, though, putting a hole in it and scaring the guy into conceding and giving Goku the money.

Goku wanders around the street holding his money, wondering who to ask, and then two bad guys in an alley spot the little bumpkin with all the money. One of the bad guys kindly calls Goku into the alley, then pulls out a gun and tells him to give up the money. Goku excitedly asks if they’re going to tell him where Bulma’s house is, but the other bad guy yells to quit yappin’ and hand over the money. Goku sticks his tongue out, and the bad guy gets mad and pulls out a knife. Goku head butts him into the wall, knocking him out, and the other bad guy humbly tells Goku to try asking a policeman where her house is.

Goku asks a girl where a policeman is, and she points to one, and so Goku gives her all his money as thanks. Goku goes up to the policeman and asks where Bulma’s house is, and the policeman asks him if he doesn’t have a better description. Goku kneels down and draws a picture of her (a very bad one, at that), but that’s not really what the policeman was looking for. The policeman decides to get out his computer and search for her, and thinks it shouldn’t take long since it’s an unusual name. The first Bulma is wrong, but the second one is her. The policeman freaks out and says this girl is the daughter of the owner of Capsule Corporation. Since it’s such a long way from here, the policeman decides to give Goku a ride on his motor scooter. Capsule Corp is a huge dome building, and Goku starts yelling “Bulmaaaaa!!!” 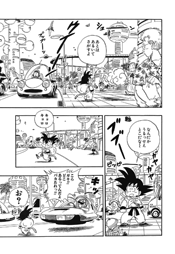 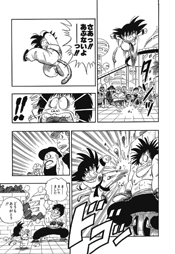 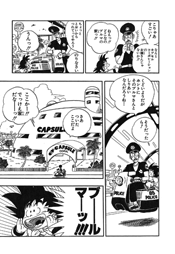