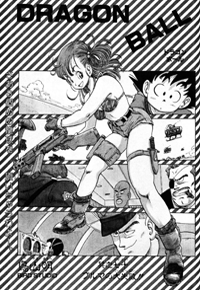 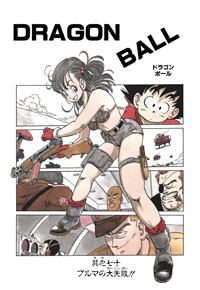 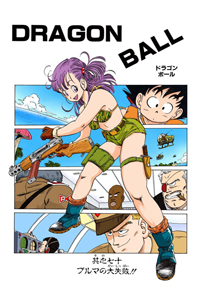 Goku and Bulma continue along on Kinto-Un, hoping that the Four-Star Ball is the next ball. Meanwhile, at Red Ribbon Army Headquarters, Black informs Red that the boy is headed towards the Dragon Ball under General Blue’s charge. Red’s pissed, and he yells at the bear guy to contact General Blue about this. At Blue Company’s Temporary Camp, General Blue is yelling at his troops to shape up, when a tiger guy says that the Dragon Ball is at the bottom of the ocean, and thus hard to get. Blue doesn’t want to hear any excuses. (Note that Blue speaks with rather feminine language.) Then Blue looks over at a guy who was picking his nose, and wants him punished for being so filthy. As the guy is getting shot, a fox guy reports that the kid is headed their way. Blue thinks this will be fun, as he looks at the picture of Goku, even though an alligator guy reminds him that this kid wiped out Silver Company and White Company.

Bulma yells at Goku to stop, since the Dragon Ball is right below them. They’re over the ocean, and Bulma says they should go over to the island so she can get a boat or something. Goku’s going to go try searching under the water and Bulma pulls out the capsule case. There’s only one capsule in there, and Bulma realizes she took her dad’s case. She decides to have a little faith in her dad, and throws the capsule… but out pops a ton of porn. Goku thinks its weird how all these people have their clothes off even though they’re not taking baths, and she yells that kids aren’t supposed to look at that. She then tears up all the magazines. Goku realizes he has to go down and search after all, and takes off his clothes, then hops on Kinto-Un and flies over to a spot above the ocean. He dives down and starts swimming towards the Dragon Ball. He swims until he can’t hold his breath any longer, and he swims back up to the surface. He hops back on Kinto-Un and flies back to the island to tell Bulma it was too deep, but she’s gone when he gets back.

Bulma is wandering around, wondering if there’s anyone here so she can buy capsules. Two jet-flyers then come by. She tries to flag them down, but they start firing at her. She starts running away, but one of the guys notices it’s not the brat, but a woman. So, the two of them land and apologize, and she asks if there’s any place to buy capsules here. Nope. But they tell her she’s cute, and ask if she wants to have fun with them. She realizes they don’t mean stuff like Famicom (Nintendo), but etchi stuff. She runs away as they fire at her again, and Goku hears her screaming. Goku flies Kinto-Un past the two jet-flyers and asks Bulma if these are bad guys. They start firing at him, so he decides to fight them. First he jumps sideways through the windshield of one jet-flyer, and it crashes. He jumps over to the next one and cuts the jet-flyer in half with the Nyoi-Bō. Bulma can’t believe those guys, and Goku says he thought up something. Kame-Sen’nin’s house isn’t that far from here, and he probably has a capsule that can go underwater. Bulma’s not too thrilled about seeing Kame-Sen’nin, and Goku says he’s smart, too. 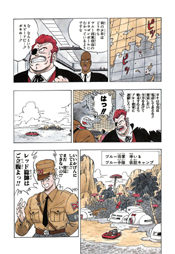 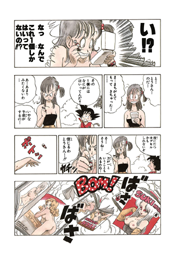 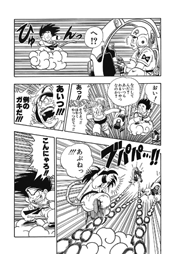