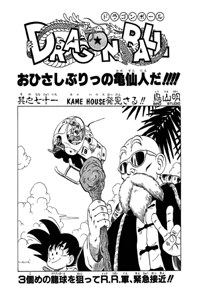 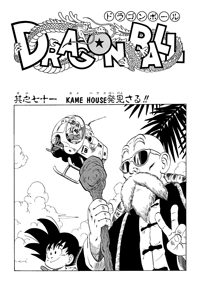 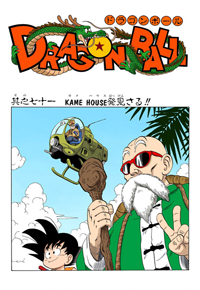 Goku and Bulma continue along on Kinto-Un until they reach Kame House. Goku says hi to “Urigome”, but the turtle corrects him, saying his name is Umigame. Umigame calls Kame-Sen’nin out, saying Goku’s arrived. So Kame-Sen’nin comes out, asking if Son Gohan’s memento Dragon Ball has been found yet. Since it hasn’t, Kame-Sen’nin asks why he’s here. Goku wants Bulma to explain, so she hops out of his shirt and grows back to normal size. Kame-Sen’nin asks how she did that, so Bulma explains about how she invented this Microband. Bulma soon gets to the point and asks Kame-Sen’nin if he has a submarine capsule they can borrow. Kame-Sen’nin asks what they want it for, and Goku says the Dragon Ball is at the bottom of the ocean, and it’s too far to dive down to. Kame-Sen’nin says he’ll lend it to them, and Bulma thinks that was too easy. “Provided that…” Bulma’s worried now. “…you give me that shrinking apparatus.” Bulma’s very relieved that that’s all he wanted. She thought he might’ve said to give her underwear, or pafu pafu. Bulma hands over her Microband, and asks for the submarine capsule, but Kame-Sen’nin says Kuririn and Lunch took it out to go shopping.

At the Red Ribbon Headquarters, Red wonders why the brat has suddenly stopped moving. Black thinks the kid might have comrades, one of which could be an amazing scientist that invented his superior radar. Red agrees, and realizes the place he’s stopped at must be his base. He tells him to contact General Blue and have him scout out that place and find the enemy’s hideout. Blue picks up the phone and receives the orders at Blue Company’s Temporary Base. Still waiting for Kuririn and Lunch, Bulma asks Umigame where the bathroom is, and he says its inside on the left. Kame-Sen’nin thinks now’s his chance, then yawns and tells Umigame and Goku he’s going to go in to watch TV. Then once he’s inside, he shrinks down and runs under the bathroom door, intending to see some good stuff. He catches Bulma with her pants down, and gets excited and hops up on the back of the toilet. But Bulma is zipping up her pants, and he can’t believe she’s already finished. Then he suddenly slips and falls into the bowl, and Bulma flushes it. Bulma wonders what the noise is (Kame-Sen’nin screaming) as she’s washing her hands.

Back outside, they’re still not back yet, and Kame-Sen’nin crawls out from the sewer and grows back to normal. Umigame wonders why he’s out here soaked instead of in watching television, and then Goku spots something. Kuririn and Lunch are back, and Goku and Bulma say hello. Kuririn calls Bulma “Pants-san“, and she yells at him that her name is Bulma. The reason they took so long was because Lunch transformed. Bulma wonders about that and Kuririn asks Goku why he’s here.

Elsewhere, one of Blue Company’s jet-flyers hasn’t found anything yet, but thinks he will soon, since there aren’t many islands. Back on the island, the situation has been explained to Kuririn, and he mentions pirate treasure being down there as well. Goku and Bulma wonder about that, and Kame-Sen’nin explains that they say the pirates hid their treasure somewhere down there. Bulma thinks that sounds cool, and Kuririn wants to go with them. Kame-Sen’nin gives him the okay, and Kuririn, Bulma, and Goku take off. Bulma remembers that she left the bag of Dragon Balls behind, but Kuririn insists it will be alright with Muten Rōshi. The jet-flyer spots them, and informs General Blue that it’s headed towards Blue’s area. It must be the brat, so the pilot decides to search the direction they came from. And the enemy base really is there: a house on a small island. Blue asks him to find out if anyone’s there. “Just a woman, a turtle, and an old man.” Blue thinks the old man must be the professor who invented the radar. 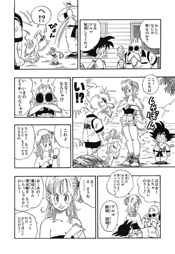 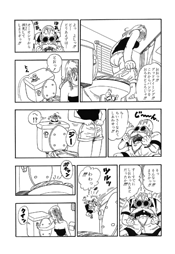 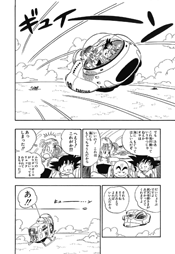