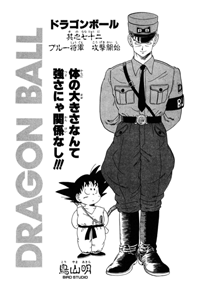 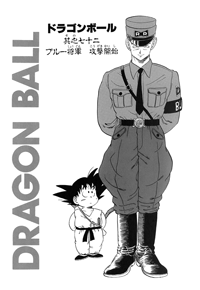 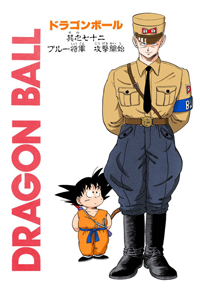 Bulma watches the radar as Kuririn pilots them through the air, and tells him to dive here. Blue is watching them from the shore with binoculars, and notices that it’s the boy alright, in a party of three this time. A soldier gets something through the radio, then comes out and tells Blue that the enemy’s two Dragon Balls are still on the island. Blue thinks that really must be the enemy’s base. He tells an officer that they’ll split the company into two. “A Company is under my command, and we’ll go after the boy! B Company is under your command, and you’ll attack the enemy’s base! Okay!”

Under the sea, Bulma says its right below them, but the ocean floor below them seems to be barren. Goku says he’ll get out and look, and wonders the scuba gear can really let him breathe in the water. Goku swims around, and spots a gap in the ground that looks deep. Bulma wants to look from the side to judge the gap’s depth. It’s very deep, so she asks Goku if there’s a way in. Goku says nope, and wishes they had the shrinking machine she gave to Kame-Sen’nin. Bulma checks the radar again, and notices that the gap goes on. She zooms out the screen to get a clearer picture, and apparently the gap continues into a cave system, from which they can enter. So she calls Goku back to the sub with the good news.

The officer leading B Company flies his plane alongside about a dozen jet-flyers towards Kame House. Blue commands A Company in a large military submarine, which has gotten close to the enemy sub. A hippo guy asks Blue if they should attack the enemy yet, but Blue wants to wait for them to find the Dragon Ball’s location. The good guys then spot the opening to the cave system. One of the soldiers tells Blue they’re entering a cave, so Blue says to begin the attack. The hippo guy yells out to fire the torpedoes, but they miss the good guys’ little sub. Blue yells to fire some more, and Bulma wonders why that submarine’s firing at them. Goku thinks it might be Red Ribbon again, and Bulma and Kuririn freak out, since the Red Ribbon Army is rather famous. Goku explains that they’re also looking for the Dragon Balls, and so he ends up clashing with them. Kuririn says they’re the worst army in the world, and they quickly duck into the cave as the second round of torpedoes heads their way.

Blue changes plans and gives the orders to pursue, and wants the gunman executed. The good guys notice they’re being chased, and Bulma yells at Goku for not mentioning the Red Ribbon Army was involved before. They keep heading down the cave tunnel, and Kuririn gets excited, since there’s a smaller hole up ahead. The Red Ribbon Army’s bigger submarine won’t fit, and as the good guys celebrate, Blue says they’ll head on in the smaller ships. Meanwhile at Kame House… Umigame spots something flying their way, and shortly after, B Company touches down on the beach. 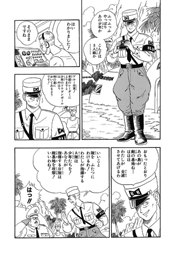 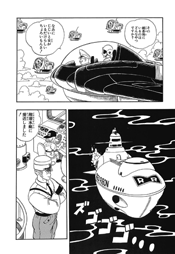 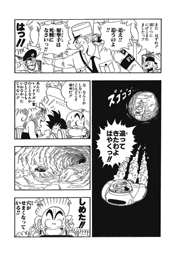