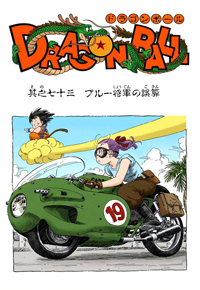 After some more idle talk, Kame-Sen’nin says he’s going to fight them, and punches the officer hard in the gut. He kicks another guy in the face, and whacks another one with his staff. Next, Kame-Sen’nin jumps up and kicks two guys at once, and then runs between two more and kicks one in the stomach while elbowing the other in the stomach. He then leaps up and elbows another guy in the back of the neck. Another soldier starts shooting at him with a machine gun, but Kame-Sen’nin catches all the bullets, then kicks him.

There’s only one dude left, and he has a gun to Lunch’s head. As he threatens to kill her, Umigame comes along with a palm tree branch and starts tickling her nose. The dude’s pissed about the “shit woman” sneezing on him, and then “Bad” Lunch gets pissed, breaks free, and uppercuts him. She starts swearing at him and kicking him while he’s on the ground, and then gives him the finger as Kame-Sen’nin pulls her away. Then they spot one last dude, and Kame-Sen’nin asks him to take his knocked out friends away.

Meanwhile, General Blue leads Red Ribbon A Company, and they have entered a cave as they chase Goku and friends. Bulma notices they’re gaining on them with their smaller boat, and a soldier wonders if they shouldn’t fire a torpedo, but Blue thinks that would be unpleasant. And the cave might, uh, cave in. Blue’s troops keep chasing them, until they surface. Goku thinks they’re back outside, until Bulma explains otherwise and they run away. Blue’s two subs surface, too, and as the troops chase them, a soldier tells Blue that B Company is on the radio. Blue can’t believe they’ve been wiped out. Goku stops, since he doesn’t see why they’re running, since he can just beat them up… and so he decides to do so.

The soldiers are all called back, and Blue explains that this is no ordinary enemy. One guy thinks nothing of this brat, and Blue yells that it’s the same boy who wiped out Silver Company and White Company. The other members of his group, an old man and a woman, wiped out B Company. Goku thinks it strange nobody’s coming, and so the three of them decide to move on. Blue says he can handle the five of them. 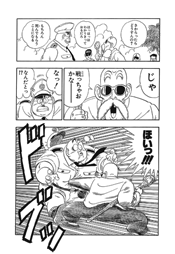