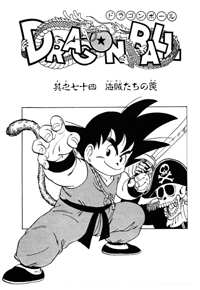 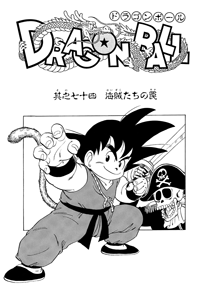 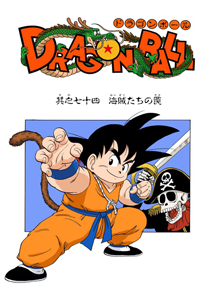 The cave is pretty dark now, and Goku wonders if they’ll really find the Dragon Ball. Bulma tells Kuririn he should go first since his bald head is so bright, and then Goku finds a light switch. Bulma wonders how there’s electricity here, someone must be using it. Blue and his troops see this, too, and he thinks it might be some kind of secret base. Bulma wonders about this undersea cave, and then Goku scares her by wearing a skull on his head. Blue hears the enemy scream, and tells this a soldier to go investigate. Goku laughs and takes off the skull, and Bulma yells at him. Kuririn asks where he got that thing, and Goku points to a pirate skeleton. Kuririn thinks some old pirates had their treasure somewhere in here, and Bulma and Kuririn get excited about it. The soldier radios Blue about that, and Blue is very delighted.

The three of them come to a weird hallway with dots on the floor and holes in the walls, and Kuririn thinks nothing of it and walks forward. He steps on one of the dots, and a spear shoots out just above Kuririn’s head. Bulma realizes it’s a trap they used to protect their treasure from intruders, and the buttons on the floor set it off. Goku tells Kuririn being a chibi saved him, and he tells Goku he’s a chibi, too. Then, Goku gets an idea — they’ll jump over the floor to the other side. Goku jumps first, and makes it no problem. Kuririn thinks he won’t have much problem either because of Muten Rōshi’s training. He jumps, but goes too high, and his head hits the ceiling and he just barely makes it. Goku yells for Bulma to jump now, but she yells that she can’t.

Blue and his men catch up to the soldier who was watching the enemy, and he says they’re still wandering around, and they don’t have any weapons. Blue smirks about them carelessly leaving their weapons in their submarine, and then giggles about the assured victory. Bulma is hanging from the Nyoi-Bō now, while Goku slowly retracts it, so that she can get across. Afterwards, they move on, and wonder what’s wrong with this next room.

Blue yells for his troops to move on, and attack to kill, and quietly thinks about getting the Dragon Balls and the treasure after they go on ahead of him. Then Blue hears a bunch of screams, and runs ahead to see all of his men dead, stuck with spears in them, in the weird hallway. “Pardon me, we didn’t mean to get wiped out…” says one soldier who’s not quite dead yet. Blue thinks a minute, and since the brat got through, the pirates must have had a way to get through also… Blue finds a switch and the wall opens up. Elsewhere, Goku, Kuririn, and Bulma find the pirates’ harbor. 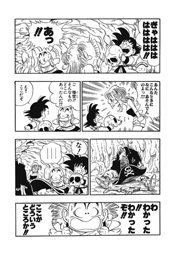 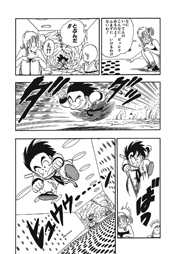 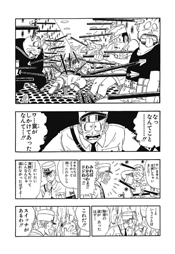