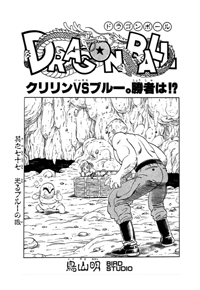 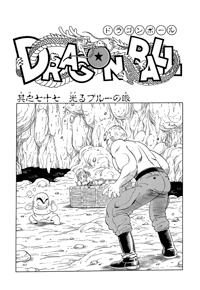 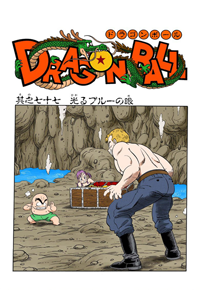 Kuririn can’t believe how strong Blue is, and he slowly gets back up. Blue can’t believe he still wants to fight, and Bulma cheers him on. Kuririn runs at him and leaps up, leaving an afterimage on the ground. He comes down and kicks Blue in the face. Blue gets up, and can’t believe he kicked his beautiful face. Blue notices his nose is bleeding, and really freaks out.

Now wearing nose plugs, Blue is very disgusted with the situation, and he looks towards Kuririn. He’s going to make this kid pay, and then his eyes flash, and Kuririn can’t move anymore. Blue says it’s his Chōnōryoku (psychic ability), and Bulma can’t believe it. Blue threatens to kill Kuririn, as Goku continues swimming to the rescue. Blue kicks the little guy up in the air, and then punches Kuririn and sends him flying into the wall. Kuririn slides down, Blue chuckles, and Bulma is worried about how she’ll be killed next.

Blue notices the place is falling down, and thinks he’ll have to hurry up with them and find the Dragon Ball. Bulma decides she’ll have to use her Oiroke Sakusen (sex appeal strategy) to save the day. She calls Blue out, and starts flirting with him, and giggling and wiggling her ass. Blue yells for her stop being so vulgar, and then she remember he’s gay, and hates women. Bulma says she’s really a man, and Blue yells that men don’t have huge breasts like that, and she runs away. Blue threatens to kill her, and then picks up a huge rock and prepares to send Kuririn to the afterlife.

Just then, Goku jumps out of the water, and Blue stops what he’s doing. Bulma yells for Goku to beat up this Red Ribbon guy who tried to kill them, and Goku says he’s going to beat him up for doing this to Kuririn. Goku and Blue face-off, and Blue swipes at Goku, but he ducks it and punches Blue in the gut. Once Blue regains his composure, he tries to sweep kick Goku, but Goku jumps over it. Goku kicks off the cave wall and knees Blue in the back of the head, and Kuririn thinks Goku’s gotten stronger since the Tenka’ichi Budōkai. Blue starts to get really pissed, and Bulma yells to look out for his eyes. Now Goku can’t move, and Blue’s got a huge rock again. 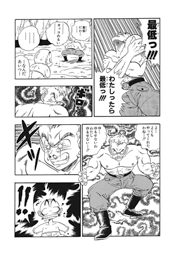 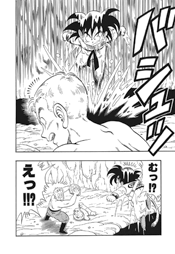 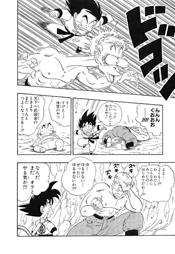