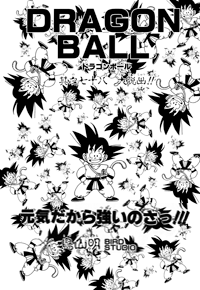 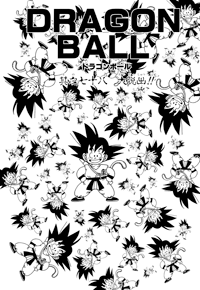 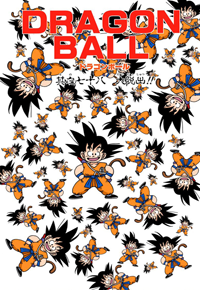 Bulma and Kuririn are worried, and Blue asks Goku how he likes his Chōnōryoku (psychic ability). Blue kicks him, and Goku bounces off the ceiling and hits the ground. Then the cave starts caving in some more, and Blue thinks he’ll have to hurry and get the treasure and Dragon Balls. Blue pulls a capsule from his pocket, and out pops a shotgun. He points the gun at Goku, and threatens to shoot the kid if the girl doesn’t tell him where the Dragon Ball is. Bulma tells him it’s probably in the bottom of the pool over there. Blue thanks her, and says he still has to kill anyone who messes with the Red Ribbon Army.

Bulma starts crying about her being next after Goku dies, and Kuririn thinks she talks too much. The shotgun is in Goku’s face, and just after Blue yells “Farewell!!!”, a mouse runs along. Blue shrieks about the filthy mouse, and drops the gun and loses his concentration. Goku can move again, and Kuririn and Bulma cheer him on. Blue is displeased at Goku’s escape, and Goku says he’ll be punished with his Jan-Ken Gū. Goku rushes at him, pokes him in the eyes with a Choki, and quickly uses his Jan-Ken Gū. Goku sends Blue flying into the wall, and he’s knocked out.

There’s no time for celebration, though, since the cave is crumbling apart even more. Goku asks Bulma about the Dragon Ball, and she points to the pool. Goku tells them to run away while he searches for the Dragon Ball, and they run off as he dives down. Goku swims his way to the bottom of the pool, while Bulma and Kuririn are on the way back towards the harbor. Goku moves a rock aside, and he finds the Three-Star Ball. He puts it in his shirt and heads back towards the surface, and Bulma and Kuririn are running like hell through the harbor as the ceiling continues to crumble.

Goku makes it to the surface, and then he looks for the mouse before he escapes. He finds him, and wants to return the favor, so he puts the mouse in his mouth and runs away. Bulma and Kuririn come to the exit of the harbor, but it’s blocked off by fallen rocks, and so they decide to try the little submarine in the water there. Elsewhere, Blue wakes up, and tries to take the treasure chest with him, but the ceiling in the treasure room falls in on him. Bulma and Kuririn have gotten the engine started, but they can’t leave without Goku, who’s still running back towards the harbor with the Three-Star Ball in his shirt and the mouse in his mouth. 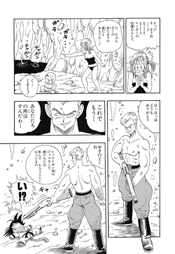 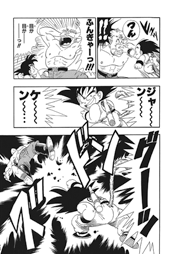 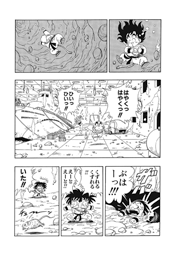