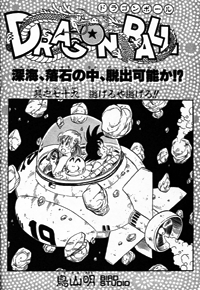 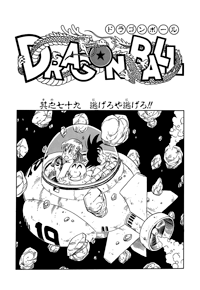 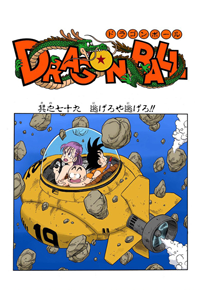 The harbor is in horrible shape, and Bulma thinks they should leave, but Kuririn doesn’t want to leave Goku to die. Bulma yells out that her own life is the most important thing in the world to her, and Kuririn faintly agrees. Bulma thinks Goku will be alright, and as they prepare to dive, Kuririn notices Goku’s come. He runs through the harbor, and a rock falls on his head, but he keeps going, and they call him over to the submarine.

The submarine dives down, and fallen rocks are everywhere. Goku pulls the mouse out of his mouth, and he’s glad he’s alright. The water becomes even more cluttered with rocks, and Kuririn yells out about the whole cave collapsing. They get excited about getting to the tunnel that leads back into the ocean, until the submarine runs out of gas.

Goku tells Kuririn to hold onto this mouse, and then he faces the back of the sub. He does the Kamehameha, and the glass covering blows off, and the submarine is propelled from the collapsing cave tunnel to the surface of the ocean. They’re all in mid-air, and Goku calls for Kinto-Un, then grabs Kuririn’s foot, and Kuririn grabs Bulma’s arm in one hand while still holding the mouse in the other. They happily fly off in their odd formation, and then Blue’s head pops up from the water.

They’re all three relieved to be saved, as they sit on the shore where Blue’s base is. Kuririn’s a bit disappointed that they didn’t get any of that treasure, but Bulma smirks and digs through her panties, and pulls out a huge diamond. Kuririn’s impressed, but wonders about how she kept it between her legs without it sticking out… Goku shows that he got the Dragon Ball, and Bulma asks if he’s going to keep on searching until he gets the Four-Star Ball. Bulma refuses to risk her life for him anymore, and Goku reminds her that she was the one who insisted on coming. And she says she wouldn’t have come if he’d mentioned the Red Ribbon Army was involved. Kuririn points out a Red Ribbon plane on the island, and says they should just go back to Muten Rōshi’s house.

Blue makes it to the shore, and notices Goku on Kinto-Un and the others in the plane, and thinks they’re returning to their secret base. Bulma tells Kuririn that they’ll give this diamond to Kame-Sen’nin to make up for losing his submarine, and Kuririn’s a bit disappointed. Then he starts sniffing the diamond, and Bulma starts yelling at him. As they head back, Blue is following them in a plane of his own. 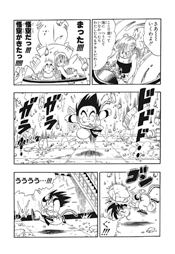 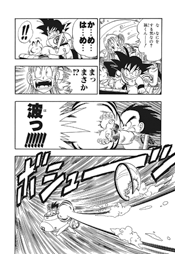 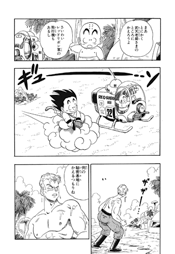