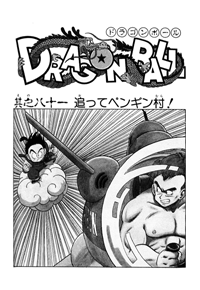 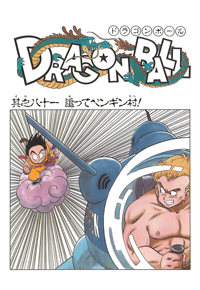 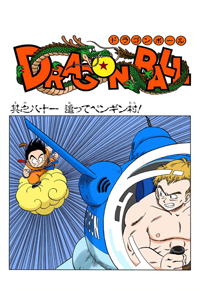 On a mysterious island, a bunch of Dr. Slump characters are walking home from school. Norimaki Senbe appears behind them and starts giving the “V” sign. Akane wants to know what he’s doing, and he explains that he hasn’t been in “Jump” for a long time, so he’s showing everyone how happy he is to see them. A couple other characters make a cameo appearance, and then Arale, accompanied by Gatchan, shows up and says hello. Then Arale and Gatchan run home, when they notice Kinto-Un and Blue’s jet whooshing through the air.

Goku’s just behind Blue, and Blue decides he needs to get rid of him. Goku tells Kinto-Un to speed up, and he gets ahead of Blue. Goku sticks his tongue out, and Blue can’t believe it. Goku pulls out the Nyoi-Bō, and prepares to whack Blue’s ship, but Blue makes a u-turn. Goku easily catches up, since Blue’s cut off his engines, and they’re over Arale’s house. Blue laughs about Goku being right behind him now, and fires off the Rocket Engines, blasting Goku in the face and knocking him off Kinto-Un. Blue laughs about this, but then crashes into a mountain as Goku falls to the ground.

Goku laughs about Blue being stupid, and he lands feet first in front of Arale. She greets him, “N’cha!”, and Goku responds with “Ossu!” Goku calls for Kinto-Un, and zooms off, and Arale and Gatchan run after him. Elsewhere, we find that Blue’s still alive… 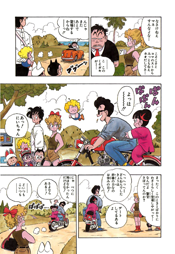 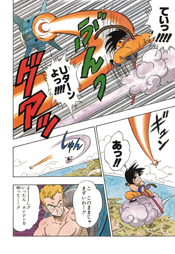 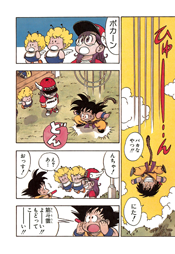