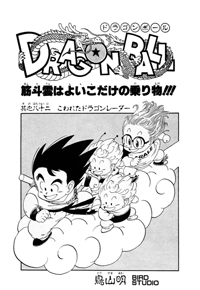 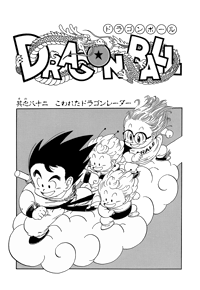 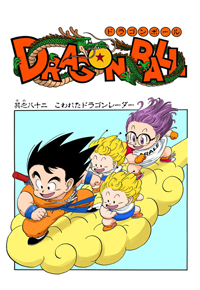 Blue stumbles along through the random mountain things, holding the bag with the Dragon Balls. He’s had about enough of the brat, but then spots him coming this way to take back his Dragon Balls. Goku doesn’t see Blue, though, and hopes the Dragon Balls didn’t get broken with the plane. Blue wonders about getting back to Red Ribbon Headquarters while hiding, and then jumps down into a valley, landing feet first.

Goku rummages through the wreckage, but he can’t find the Dragon Balls, or Blue’s body, which must mean he’s still alive. Then Arale arrives, and Goku’s impressed that she’s as fast as Kinto-Un. He wants to know where she trained, but she doesn’t understand. She asks why he’s here, and he says he’s looking for a bad guy. Then Goku calls Kinto-Un back over, and hops on to get a better look at the place.

Blue’s at a phone booth, and he wonders how he’ll return to headquarters, when he spots a car. He waves down the car, annoying the guy inside. Blue wants the car, and the driver realizes it’s a robbery. How convenient that they’re so close to the phone booth… He runs inside, and then comes out, and shows his true form that appears from eating umeboshi (dried ume fruit); “Suppaman!!!” Blue’s not impressed, though, and so now Suppaman’s going to show him his power. Blue still doesn’t care, and smashes the phone booth. Now Suppaman wants to know what he can do for him, and Blue wants capsules or a plane. Suppaman doesn’t know what capsules are, and Blue thinks he must be a bumpkin, and wants to know about a plane. Suppaman thinks a minute, and then says Norimaki Senbe has one. “You go way down this road, and when you see the sea, his house is to the right.” Blue takes off with Suppaman’s car.

Goku still can’t find Blue, and then remembers to check the Dragon Radar. Except that it’s broken again, and he thinks he’ll have to go back to Bulma. Then he asks Arale where this is, and she tells him this is Penguin Village. Goku says he came here after someone, and asks if she knows where Kame-Sen’nin’s place is, but she doesn’t. Goku’s worried about this, not knowing where he is. Arale asks if his thing is broken, and Goku says it is. Arale tells him that the doctor can fix that no problem!

Goku asks if she knows where his house is, and she does. Then Arale wants to know if she can get on the cloud, and she does no problem, and they zoom off towards the house. Arale liked the ride, and Senbe and his wife wonder who this kid is. Arale points to Senbe, saying he’s the doctor, and then Goku says, “Ossu… No… Good afternoon!” Goku shows him the Dragon Radar, and explains that it tells you where Dragon Balls are, but Senbe doesn’t know what that is, of course. The little baby, Turbo, understands how the radar catches the unique waves, though. Senbe gets to work on it, and it’s really complicated, and he wants to know who created it. “A woman named Bulma.” Senbe can’t believe a woman is a greater genius than him. Elsewhere, Blue’s driving and is almost to the house with the plane. 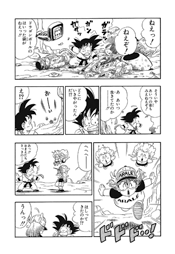 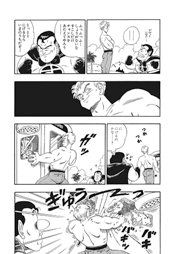 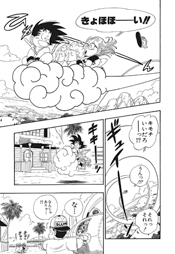