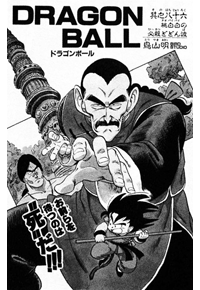 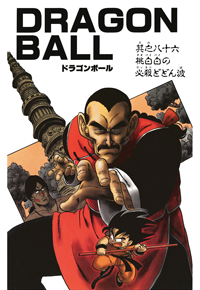 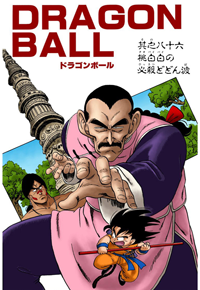 Goku and Bora continue talking about the tower, and then Upa spots something. Tao Pai-pai jumps off the pillar, and they just barely move out of the way before it crashes into the ground. Bora wants to know who the hell he is, and he introduces himself as the world’s number one hitman, Tao Pai-pai!

Bora wonders what a hitman would want at this holy place, but Tao Pai-pai says it’s not this place he wants but the kid over there. Goku doesn’t understand, until Tao Pai-pai explains that the Red Ribbon Army hired him to kill Goku. Goku’s pissed that they’re still after him, and then Upa begs Father to help him. Bora tells Tao Pai-pai that this boy saved his son’s life, and it’s his duty to protect this holy land.

In the blink of an eye, Tao Pai-pai moves next to Bora, and grabs the tip of his spear. Bora can’t move now, and so Tao Pai-pai says he’ll make the move. With one hand, he turns the spear upwards, making it vertical and putting Bora in the air. Tao Pai-pai jerks the spear so that Bora flies straight up, then Tao Pai-pai decides to return the spear, and throws it straight into the air. Goku calls for Kinto-Un, but it’s too late. The three watch as Bora comes crashing to the ground, and Upa runs over to him, crying.

Goku rushes at Tao Pai-pai, and swipes at him, but Tao Pai-pai jumps out of the way and kicks Goku into Karin Tower. Tao Pai-pai thinks he’s dead, and is a bit disappointed, but Goku gets up, and decides to give him a Kamehameha. Tao Pai-pai stands with his legs apart and his arms crossed in front of his face, taking the blast head on. Tao Pai-pai survives, but his clothes are torn to shreds, and he’s pissed. Then Tao Pai-pai fires his own one-fingered Dodonpa at Goku, and he’s… dead! Tao Pai-pai grabs the bag with the Dragon Balls, thinking his work here is done. 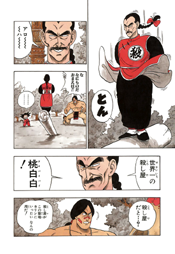 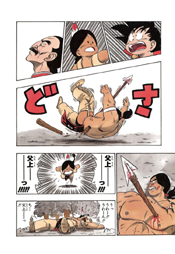 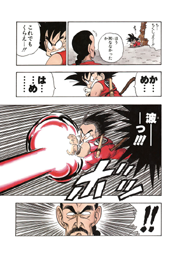