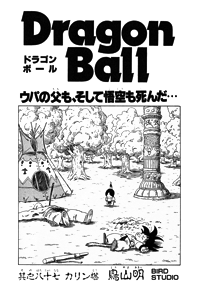 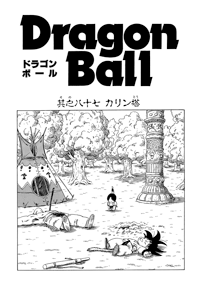 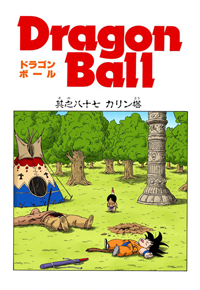 Tao Pai-pai pulls the pillar from the ground and prepares to leave, and then Upa picks up a rock and throws it at him for killing Father and Big Brother. But Tao Pai-pai just blows it back and it hits Upa in the face, and he tells the crying kid to be glad he’s not dead. Then he tosses the pillar, and flies off, leaving Upa alone at the base of Karin Tower.

At Red Ribbon Headquarters, Red’s impressed with Tao Pai-pai’s work. But then he and Black notice that the radar is showing Tao Pai-pai leaving the Karin Holy Land with only three Dragon Balls, and the fourth is still there, and Red’s none too thrilled. Meanwhile, Tao Pai-pai is in a small town, and he shows a tailor a cute drawing of his old outfit, and wants him to make one with the same design. The tailor says it’ll take a week, and Tao Pai-pai “convinces” him to make it in three days. Then Tao Pai-pai uses the phone to call Red Ribbon Headquarters, and tells Red he’ll be back there in three days. He took care of the brat, and wants his money. But Red chews him out for only getting three Dragon Balls, and then he looks in the bag and notices. Red thinks it shouldn’t be much trouble going back and getting it if the brat is dead.

Upa has buried his father, and then he takes the shovel and starts to bury Goku, but then… Goku wakes up! He has a hole in his shirt right where the kame logo was, and the Four-Star Ball falls out from it. Apparently that’s where the Dodonpa hit, and Goku says Grandpa helped him. Then Goku sees Bora’s grave, and takes a serious look at his Dragon Ball. He tells Upa that he’ll gather all the Dragon Balls to return his father back to life. Upa tells Goku that that guy has his bag with the rest of the Dragon Balls.

Goku says that Tao Pai-pai will have to come back for the Four-Star Ball, but gets pissed that his technique was useless against him. Upa tells Goku that he can surely climb Karin Tower, and Goku remembers about how strong you can get at the top. Goku stares up at it, and thinks about how it’s too easy with Kinto-Un, and he has to use his own power. Goku decides to go for it, and Upa wishes him well. He puts the Four-Star Ball in a pouch at his side, and tells Upa to hide if things get dangerous.

Goku jumps up really high to get things started, and quickly makes his way up, and eventually Upa says he can’t see him anymore. Goku keeps going, and still can’t see the top even after passing through the clouds. He almost falls down, but his tail saves him. Eventually, night passes, and he’s still not there. He’s hungry, so he’s going really slow now. The next morning comes and he is slowly climbing, when he spots something. A little more climbing, and he reaches the top! 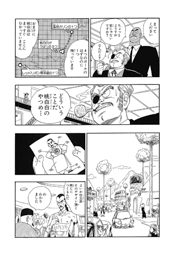 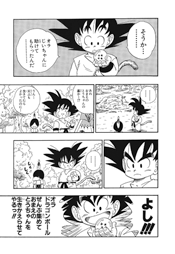 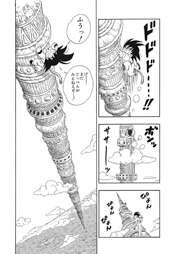