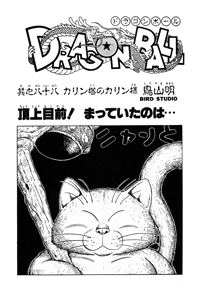 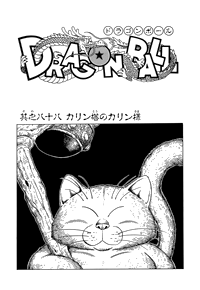 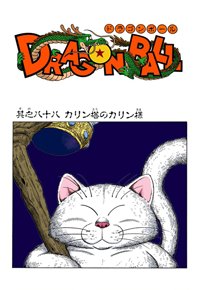 Goku makes his way to the top of the tower, and there’s a huge platform supporting a palace at the top. He makes his way up from the tower through a hole in the floor, and wonders where the power-up is amongst all this weird stuff. As he looks through some weird water barrels, a voice calls him to come up. Goku leaves the room and heads upstairs to a big round room with no walls, just railing and a ceiling supported by pillars. There’s an old cat standing there with a staff, who says he’s impressed with the speed this chibi got up here, and Goku tells him he’s even more of a chibi. Goku wants to know where the sen’nin is, and cat says it’s him, but he’s more of a cat hermit.

Goku asks about the strange water that powers you up, because he wants to drink it. “Ah, the Super Holy Water.” The cat points to it, in a jar atop the stand in the middle of the room. He wants to know why Goku wants it, and Goku starts to explain, but the cat tells him to hush, then stares at him a minute. “Indeed. You’re gathering the Dragon Balls to return Upa’s father back to life. But you can’t do that unless you become stronger than that Tao Pai-pai person…” Goku freaks out, and wants to know how he knew that without him talking, and the cat says he can read minds, since he’s a sen’nin. The cat says his intentions aren’t impure.

Goku walks over to the stand, and climbs up and prepares to take the jar with the strange water, but the cat wonders if he can drink it. Goku asks if he means it’s yucky, and the cat says it’s because he’s going to interfere. He runs over and knocks Goku off the stand, and Goku’s pissed, and thinks the cat’s a bad guy. Goku jumps up for the jar again, but the cat jump kicks him back to the ground. Goku’s pissed about this, and the cat explains that he needs to avoid his interference.

Goku does the old point and look trick, and then jumps up for it while the cat’s head is turned, but the cat just bonks him in the face with his staff. Then the cat puts the jar on the end of his staff, and starts waving it around, and Goku starts chasing him all over the place until he gets tired out. Goku says he needs to eat, and the cat decides to feed him. He tosses Goku a bean, and says it’s a senzu, and one seed is worth ten days of food. Goku decides to eat it, and he’s all filled up! He says he can get the jar now, and rushes at the cat, but still can’t get it.

Goku’s exhausted now, and asks if he’s the first to come up here. The cat says just one other person did, three hundred years ago, but Goku interrupts and asks him how old he is; eight hundred years. Goku says that’s way older than he is. The cat continues and tells Goku that this person was his teacher, but Goku doesn’t know who he’s talking about, and the cat says he means Muten Rōshi. Goku’s amazed that Kame-Sen’nin got strong from drinking the strange water, and asks the cat if he happens to be a really famous person. The cat says to call him Karin-sama, and Goku asks how long it took Kame-Sen’nin to get the water. He holds up three fingers and Goku’s amazed that it was three minutes. “No. Three years.” 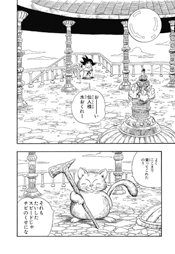 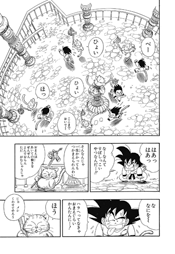 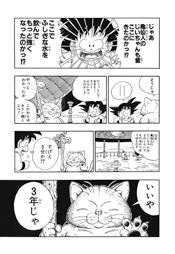