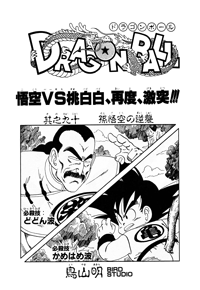 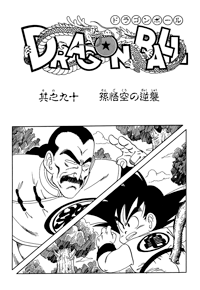 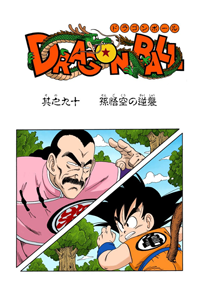 At the foot of the tower, Upa is running around with a little tomahawk and looks up, wondering if Goku made it to the top since it has been three days. Meanwhile, Tao Pai-pai’s outfit is finished, and he prepares to leave for the Dragon Ball, when the guy asks him to pay. Tao Pai-pai can’t believe he’d ask the world’s famous number one hitman, Tao Pai-pai, to give him money. The tailor says he needs money to live, but Tao Pai-pai decides on an alternate payment. He jabs him in the forehead with his finger, killing him.

Upa is still looking at the tower, when Tao Pai-pai’s pillar crashes into the ground again. Tao Pai-pai tells him to give up the one remaining Dragon Ball, and Upa throws the tomahawk at him. Tao Pai-pai just ducks his head to the left, and then sweep kicks Upa. Tao Pai-pai then holds him up in the air by the neck, and asks about the ball, but Upa won’t say. So he thinks this stubborn brat wants to die, and throws him towards the tower. Goku is diving straight towards the ground, calls for Kinto-Un, and manages to catch Upa before he crashes into the tower.

Goku says that three seconds are already up, and Tao Pai-pai can’t believe how he’s changed in three days. Goku says he trained at the top of the tower, and Tao Pai-pai wonders about the sen’nin that lives up there. Tao Pai-pai thinks it’ll be interesting to see what’s come of the little exercise the kid’s had. 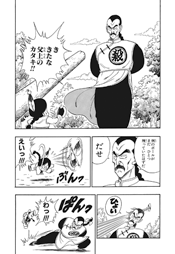 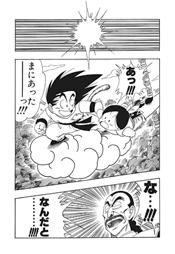 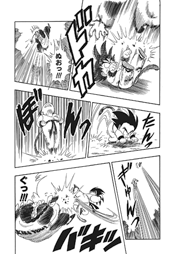