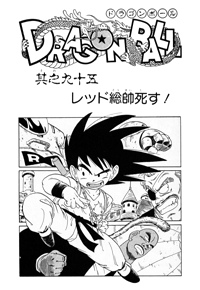 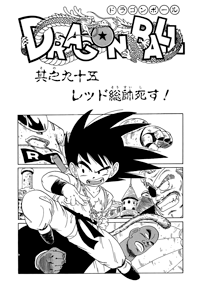 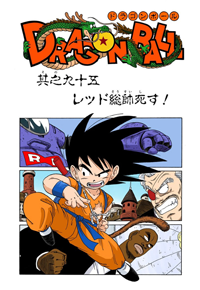 Goku kicks a soldier in the face, then punches another one, and kicks a third in the head. Some soldiers behind a table fire a rocket at him, and one of them thinks he’s dead. But Goku just gets pissed and rushes at them, smashing the table up against the wall, squishing the soldiers. The other two soldiers in the room run away, and Red’s pissed watching this go on. Black says all their remaining soldiers are running away, and Red can’t believe this is all happening just because of one brat.

Red can’t stand it, all he really wanted to make himself taller. Black can’t believe they were gathering the Dragon Balls just for his height, when they could rule the world, but Red says being short makes him unpopular with the gals. He talks about how he was teased when he was in school, and Black says the Red Ribbon Army should be conquering the world. Red tells him to shut up, since he’s the commander. Black can’t take it anymore, and he shoots Red in the head. Black says he’s in charge now, and then Goku shows up.

Black offers Goku the opportunity to share the Dragon Balls and take over the world, and Goku says no, he’s going to return Upa’s daddy to life. Black tries to convince him further, but Goku still refuses. So, they have to fight. Black swings at him, but Goku dodges, so he kicks at Goku, but he jumps over that too. Goku charges at Black and elbows him in the gut. Goku yells at him to give in, but instead he pulls out a capsule, and out pops a Battle Jacket (giant mecha). Black hops in and punches Goku hard in the face. Elsewhere, everyone else continues towards Red Ribbon Army headquarters. 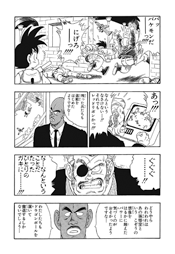 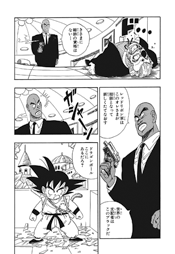 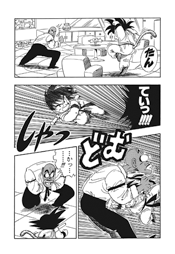