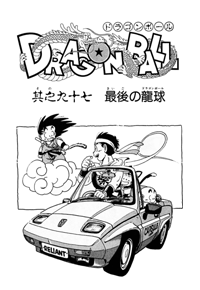 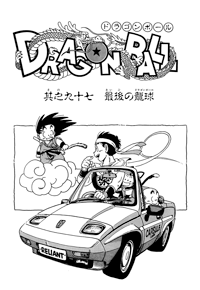 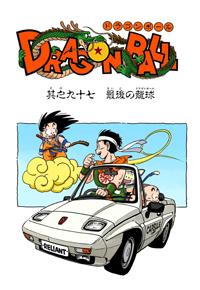 Still at Red Ribbon Headquarters, Goku checks the Dragon Radar to find the last Dragon Ball, but it doesn’t appear. Just then the plane lands outside and Yamcha leads the way to rescue Goku. Before they get too far, Kame-Sen’nin says they need a plan, and Yamcha agrees. Oolong wishes everyone good luck, and Bulma yells that he’s going too. Oolong says his stomach hurts, and Bulma yells at him some more, and eventually he gives in and picks up his shotgun. Lunch (bad) can’t wait to raid the place and kill everyone. They start discussing the plan (Kame-Sen’nin suggests that Bulma get naked to distract the soldiers), and Kuririn yells for everyone to hide. Nothing’s coming, until they spot Goku headed their way.

Goku thinks the Dragon Radar’s all broken again, and everyone starts calling him, and he wonders what they’re all doing here. Kuririn says they came to help him, and Goku explains that he beat them up and got six of the Dragon Balls. Yamcha asks Pu’er to go look, and he comes back and says it’s true. Everyone’s jaws drop, and Goku says he’s gotten stronger since before. Goku tells Kame-Sen’nin that he climbed Karin Tower and drank the strange water, and the old man remembers how it took him three years to get the Super Holy Water.

Goku tells Bulma about the Dragon Radar, and she asks if one of the six balls he found was his grandfather’s memento. Goku says he did get the Four-Star Ball, but he promised to return Upa’s Dad, who was killed by the Red Ribbon Army, back to life. Bulma tells him they need to go back to Kame-Sen’nin’s house so she can fix the radar, so everyone gets back in the plane and Goku hops on Kinto-Un. On the way back, Kame-Sen’nin notes that Goku has become stronger than him, and Yamcha tells Kame-Sen’nin that he wants to train with him after they find the last Dragon Ball.

Back at Kame House, Bulma can’t fix the radar, and thinks maybe someone swallowed the Dragon Ball. Apparently, the radar can’t catch the unique waves of the Dragon Balls from within a living being. Oolong thinks someone would be stupid to swallow them, and Bulma tells him it could’ve been a crocodile or a hippo. Goku’s worried, and Yamcha wonders if it wouldn’t come out as crap. Kame-Sen’nin suggests they go visit Uranai Baba’s palace, since she’s a great fortune teller who can find anything. Kame-Sen’nin gets out a map, and shows them where it is, then Yamcha, Pu’er, Goku, and Kuririn get in the plane and fly off to find Baba’s palace. 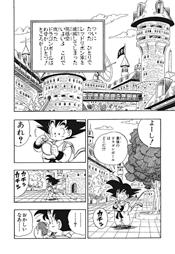 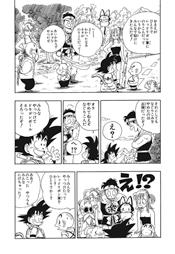 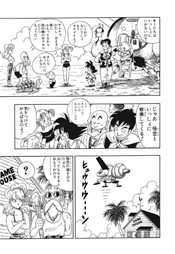