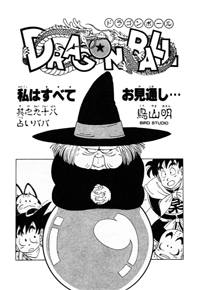 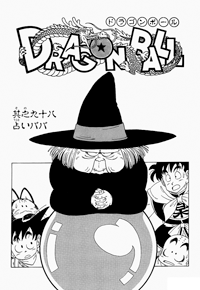 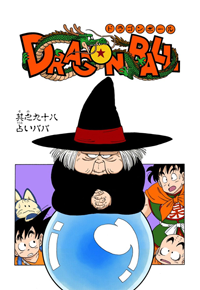 They continue flying along, and Yamcha says Goku’s clothes are all worn out and stinky. Yamcha says they’ll go into a town and buy some new clothes before they go have their fortunes told. In the town, Goku doesn’t like the little late nineteenth century school boy outfit (golf clothes). Kuririn and Pu’er laugh at him, and Yamcha says its perfect for him, he looks like a little gentleman. The tailor asks him if he wants the same outfit from before with the kame (turtle) letter, and Goku says yeah, along with a tail hole. The tailor tells him it’ll take an hour, and Yamcha whispers to please use the cheapest fabric he has.

The four of them leave the store and wonder what they’ll do, and Goku decides to go get Upa, and he hops on Kinto-Un and flies back to Karin Tower. He calls Upa out of his teepee, and he’s very happy to see that Goku is still alive. Goku tells him that he beat up the Red Ribbon Army and has six of the Dragon Balls. The two of them leave on Kinto-Un and when they get back to town, Goku introduces Upa to everyone. Yamcha says his clothes are done, but Kuririn whispers to ask Goku if this is a cute girl, and Goku asks Upa if he’s a man. Kuririn’s a bit embarrassed as Goku tells him he knows men from women, and Yamcha gets annoyed with Goku for taking his clothes off in front of everyone. Yamcha also yells at Goku not to play with himself.

Goku’s very happy with his new clothes, even the shoes, and they fly off. They look around for a bit, and Kuririn finally spots the place floating on a lake in the desert. Upa thinks it’s hot here, and they see there’s some other guys ahead of them. A ghost comes out and greets them, and Goku asks him if this is Urenai Baba’s house. (Urenai means “unripe”.) The ghost corrects him that it’s Uranai Baba, and asks if the five of them are companions and tells them to wait their turn. Yamcha wonders about this, and they see a rich couple walking out satisfied. The ghost calls the next group to come in, and they eventually come back out all beaten up.

The ghost tells Goku and everyone to enter, and Upa and Pu’er are scared. They go inside, and atop a floating crystal ball is a little old hag in a witch’s outfit. Goku asks her if she’s Urenai Baba, and she yells that it’s “U-ra-na-i Baba”. Goku says that’s a weird name, and tells her they want her to find something. She says it’ll cost ten million zenny, and Yamcha explains they don’t have the money. So, she says to come this way, and leads them outside to a fighting ring right in the middle of the lake. Baba says she wants them to fight against her fighters, and explains that after you beat one, you fight the next fighter. If you lose, you switch off to someone else. If you beat all five of her people, you get a free fortune telling. They think this sounds good, and Kuririn brags about how three of them were competitors in the Tenka’ichi Budōkai, and Baba thinks this’ll be fun. 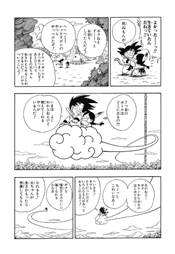 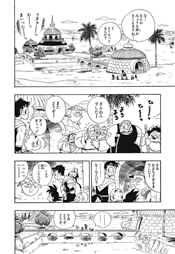 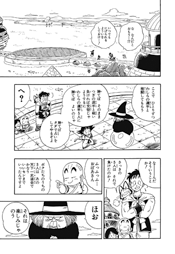