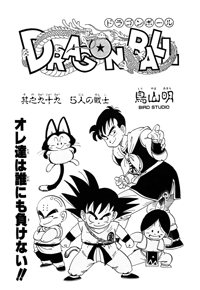 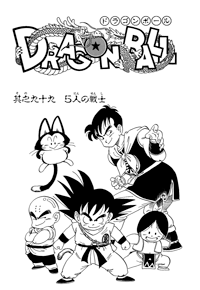 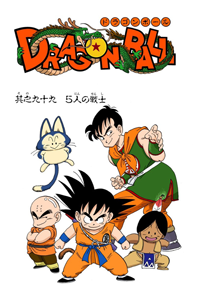 Baba tells them they should stop, they’re only kids, but Kuririn and Yamcha aren’t worried. Pu’er and Upa say they aren’t fighters, though, and Baba wonders about only three of them going up against her extremely strong five. Kuririn’s still really confident, and Yamcha asks about the rules. “Basically, if you give up or fall into the lake, it’s a loss.”

Baba calls for the match to start, and Kuririn’s going first. He tells Goku he’ll probably beat up all five himself, and then Baba calls out Dracula Man. A bat flies out, and then turns into a freaky vampire dude dressed like a kick boxer. Kuririn thinks he looks frail, and Baba calls for the match to begin. Kuririn flies at him with a kick, but Dracula Man just jumps up and turns into a bat again. He starts flying all over the place, and Kuririn can’t keep up with his speed. Then, he jumps on Kuririn’s back, as a person again, and bites down on his head.

Goku tells Kuririn to shake him off, and Baba laughs and says he needs to hurry and give up before he bleeds to death. Kuririn then leaps backward, like a back flip, with Dracula Man still on his head, and Dracula Man let’s go of him and Kuririn lands headfirst. Baba offers him a blood transfusion after he loses (the ghost has a bag of blood), but Kuririn still wants to go, and starts to get pissed, but blood starts squirting out from the holes in his head. Yamcha yells for Kuririn to calm down, so he starts praying, but the blood just leaks out instead of shooting up. Everyone laughs at him, and he starts to get really pissed, and loses so much blood he starts to get lightheaded. Dracula Man takes the opportunity to kick him into the lake.

The ghost gives him the blood transfusion, and then Kuririn’s head is all taped up. Goku tells him he lost too easily, and Kuririn yells at him, then Baba asks who’ll fight Dracula Man next. They all discuss it, and then Pu’er and Upa step up. Goku asks if they can’t fight together since they’re so small, and Dracula Man goes for it (he can have blood from both of them). Yamcha tells them the plan again, and Upa chews on something. Then they get in the ring, and Dracula Man runs their way, and Upa breathes garlic in his face. Dracula Man really hates that, and so he turns into a bat, and then flies down towards Pu’er. Pu’er quickly transforms into a porcupine, but Dracula Man has him in his mouth. Dracula Man spits him out and looks up; Upa’s standing in the form of a cross. Dracula Man turns into a bat again and tries to fly away, so Pu’er transforms into a hand and swats him down into the lake. 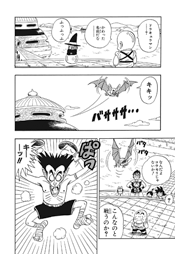 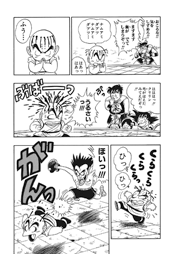 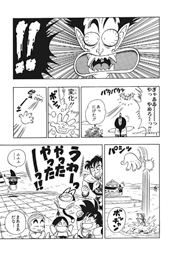