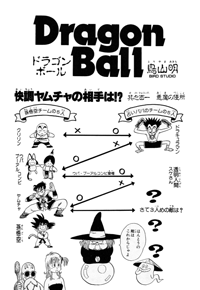 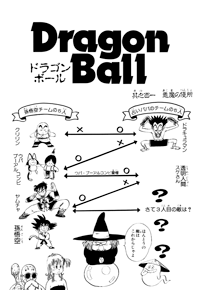 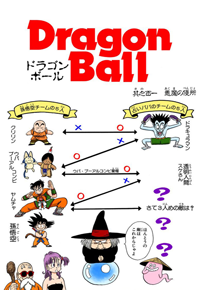 Yamcha notices Muten Rōshi and Bulma are here, and Bulma asks Kuririn why they’re even having these matches, so he explains Uranai Baba’s policy to her. Then Kame-Sen’nin says his “Big Sister” is acting the same as always, and everyone’s shocked to hear Baba’s his older sister. Baba says he’s still the same as always as well, he’s still a sukebe (lewd person). Kuririn asks Muten Rōshi why they’re going through such trouble when he could just ask her, but Baba says she wants money or these matches, since they’re fun.

Baba leads them inside for the next match, and on the way, Bulma asks Upa who he is, and Upa introduces himself, and she remembers that Goku is gathering the Dragon Balls to return his father to life. Kuririn tells Upa that Bulma’s scary, and she yells at him. They head into a building, and up a circular staircase, Kame-Sen’nin tells Yamcha they’re going to the Devil’s Toilet. Yamcha’s a bit worried, and asks for some advice, so Kame-Sen’nin tells him, “Don’t die.” They come to a door, and Baba says the competitors need to go in there, and everyone else continues up the stairs.

There are two giant statues of some devil-type figures facing each other in this room with their tongues sticking out, and there’s a small gap between the two tongues. Yamcha is in one of the mouths and below that is some gross lava stuff. Baba (who is floating over a roll of toilet paper) drops some meat in, and it disintegrates instantly, showing Yamcha that he doesn’t want to fall in. Bulma thinks this is a messed up family, and then Baba calls out Mummy-kun, who comes out of the other mouth. “Sigh, after the invisible man is the mummy…” says Yamcha.

Baba tells them that whoever says they give up or dies, loses, and then calls for the match to begin. Yamcha thinks he’ll make use of his speed and technique in this confined space to win the match. He darts across, but so does Mummy-kun, who jumps over him. Mummy-kun kicks at Yamcha from behind, but he ducks it, and Yamcha is just barely able to dodge his punches. Then Mummy-kun hits Yamcha in the face, and nearly knocks him off the tongue, but he manages to catch onto the edge. Mummy-kun thinks this match has gotten interesting. 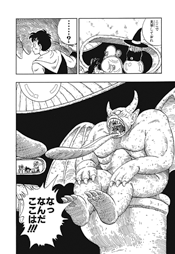 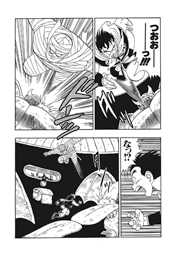 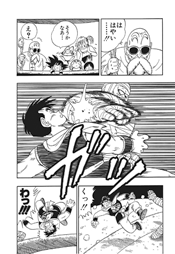