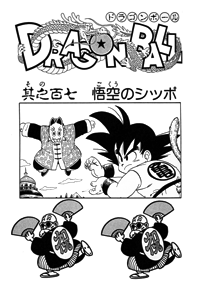 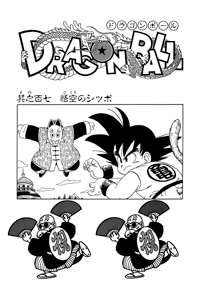 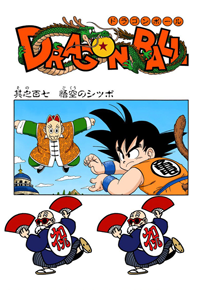 The fighter is thinking about Goku blocking his Kamehameha with Zanzōken, when Goku dives down preparing to use his attack now. The fighter thinks he’s a sitting duck in the air like that, and prepares to fire off another one, until Goku starts chanting “Ka…me…ha…me…” The fighter can’t believe he can use Kamehameha. Goku fires his Kamehameha down at him, busting up some tiles and knocking the fighter backwards. Goku comes down, and then jumps over and knees the fighter in the gut.

It seems like Goku’s won, until the fighter laughs and grabs Goku’s tail. He stands up, then slings Goku forward, smashing him face first into the ring. Yamcha yells out about how Goku loses all of his strength when you grab his tail, it’s his only weak point, and explains how he and Pu’er saw it when Gyūmaō’s daughter pulled on it. The fighter is now holding Goku up by the tail, and Baba thinks this is great. Kame-Sen’nin thinks he knows who this person is if he knows Goku’s weak point, as the dude slams Goku around some more.

Out in space is a satellite, and Pilaf is watching the events on a monitor in the middle of nowhere. He’s very happy to find out that the brat’s weak point is his tail. Pilaf is very excited about becoming the ruler of the world. He also talks about how this special case he has his Dragon Ball in prevents it from showing up on radar. So now, Pilaf says he’s not scared of that kid anymore, and the three of them hop in their Mercedes car to go steal his Dragon Balls.

Back at the match, the fighter keeps slinging Goku around by his tail, and Kame-Sen’nin announces that the fighter is Goku’s dead grandfather, Son Gohan. Everyone’s shocked to hear this, when Goku’s tail suddenly breaks off, and is left in Gohan’s hand. 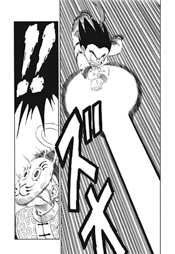 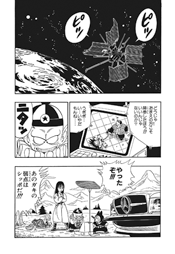 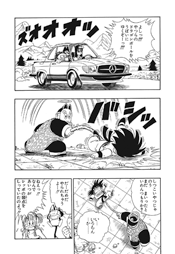