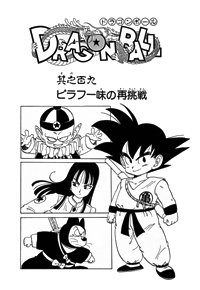 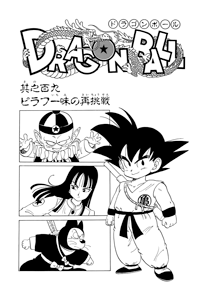 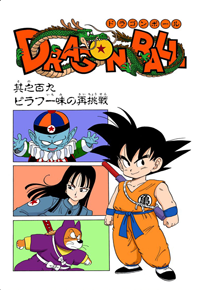 Goku says he’s leaving, and calls for Kinto-Un. He asks Upa to hold onto the Dragon Balls while he’s gone. Bulma thinks it’s suspicious that the ball’s not showing up on the radar even though it should be in the car. Meanwhile, in the Mercedes, Pilaf reminds Mai and Shuu of the plan. Pilaf starts thinking about how he’ll rule the world, and then Shuu asks him what he’ll do when he rules the world. Pilaf thinks a minute, and then yells at him that it’s a secret. Goku spots the car, and hops down onto the roof, then peeks down through the windshield. The car ends up swerving off the road, and Goku falls off.

Goku recognizes them, and Pilaf decides they’ll just go on with the plan here. The three of them get out of the car, and Goku thinks they’re probably planning to do something bad, so they should hand over the Dragon Ball. Pilaf laughs, and tells Goku that if he wins, he’ll get their Dragon Ball. But if they win, Goku has to give up his six Dragon Balls. Goku wonders how they know about his six Dragon Balls, and Pilaf says he’s a genius. Goku agrees to it, and after they promise, the three of them toss out some capsules. Out pop three goofy mecha, and they each hop into one.

Pilaf is in a small round one, Mai in a big fat one, and Shuu is in a tall one with long legs and a tiny upper body. Goku’s ready to fight, and Pilaf says he must want to die, talking about how he came up with their genius design. He tells Mai to go get him, and she stalls a bit. Goku gets tired of waiting, and flies over and jump kicks Pilaf’s robot into a mountain. 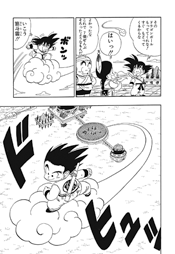 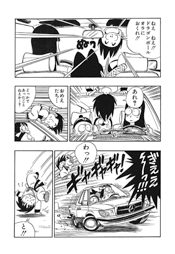 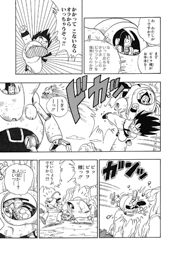