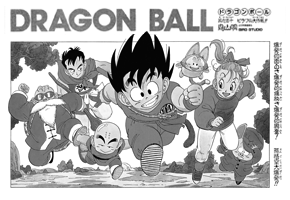 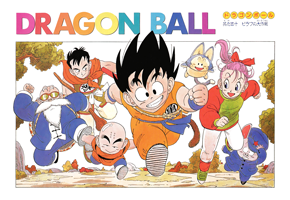 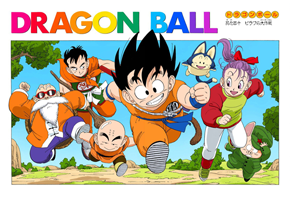 Goku can’t believe they’re so weak, as Mai and Shuu check on Pilaf-sama. Pilaf’s pissed, and then yells at them that it’s Plan Tail Grab. They all three surround Goku, and Pilaf starts to count down, until Shuu yells out to wait. Shuu says he doesn’t see his tail, so it’s probably in the brat’s pants. Pilaf says there’s a change in plans, and asks Goku to wait a minute, then the three Pilaf Machines huddle. Then they finish, and they surround Goku again. Pilaf does the “point and look” thing, and while Goku’s turned away, Mai grabs him from behind, then Shuu blasts him with some fire from his mecha’s tail.

Pilaf says his clothes are burning to expose his ass (his pants are completely burned off now), and then goes over and prepares to grab his tail. Except that there is no tail. Mai tells Pilaf-sama to hurry up, since the kid is so strong (she can’t hold him much longer). Shuu asks Pilaf-sama what’s wrong, and he tells them the tail’s gone. Goku breaks free from Mai’s mecha’s hands, and then gets pissed that his pants are gone. Mai wonders what they should do, and Pilaf decides they’ll show off their true power. The three Pilaf Machines combine into one giant Pilaf Machine. But then Goku just fires a Kamehameha at it, blowing off the left arm.

Mai says the number two mecha (hers) isn’t working, and Pilaf says to toss it aside, they’ll convert to Ostrich Mode. Pilaf’s little round mecha hops onto Shuu’s mecha’s tail, and Mai hops onto Shuu’s mecha’s back (and it does look like an ostrich), and they start to run away. Goku gives chase, and he’s gaining on them, so Pilaf says to shoot off a missile. A big Bullet Bill-looking thing comes at Goku, and he catches it and throws it at their ostrich thing, blowing it up. “I won! Give me the Dragon Ball.” Pilaf hands over the One-Star Ball, and now Goku needs some clothes, so he takes Shuu’s outfit, and it’s a perfect fit. 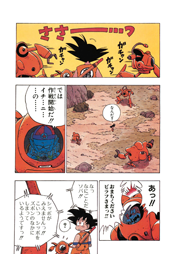 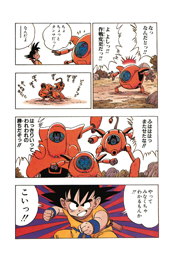 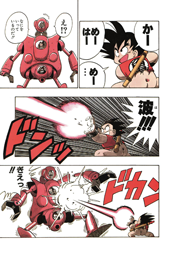