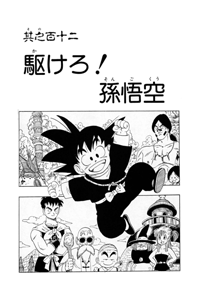 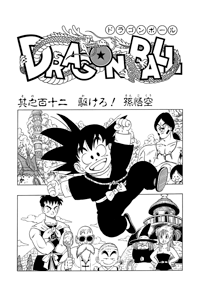 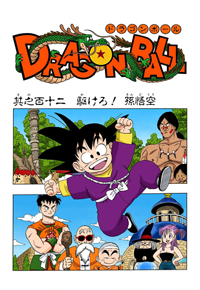 Bora completely emerges from his grave, and Upa runs over crying to greet him. Bora wonders what’s going on, and Upa explains that Goku gathered all of the Dragon Balls to bring him back to life. “I have granted thy wish. Well then, I bid thee farewell.” Shenlong disappears, and the Dragon Balls prepare to disperse. Goku jumps up and quickly grabs the Four-Star Ball. The sky returns to normal, and Upa asks Goku why he jumped up there. Goku explains that he wanted his grandpa’s Four-Star Ball, and it’s turned to stone, so Goku explains that too. Bora tells Goku he’s truly thankful, but Goku says he’s just glad to see him alive again. Upa tells his father how Goku climbed Karin Tower and beat up the guys who killed him. Goku prepares to leave, and Upa and Bora are disappointed that he won’t stay a little longer. They decide they’ll all meet up again someday, and Goku calls for Kinto-Un. They all say goodbye and Goku flies off.

Goku returns to Uranai Baba’s palace and tells everyone that he brought Bora back. He suddenly has to piss and runs over to the side of the ring and pisses into the lake. Kuririn wonders if he’ll really save the world some day. Bulma asks if he’ll go search for his grandfather’s memento again in a year, and Goku shows them the Four-Star Ball as a stone. Kuririn wonders what he’ll do now if he already has the ball, and Goku says he wants to train for the next Tenka’ichi Budōkai. Yamcha says he’s also going to train under Muten Rōshi, and Goku’s excited to hear that. Bulma tells Yamcha he better not end up acting like a pervert because of his training.

Kuririn and Yamcha wish Goku farewell, and Goku tells Bulma that he hopes she’ll become quiet, and she yells at him. Goku prepares to leave, and calls for Kinto-Un, but Kame-Sen’nin yells at him, telling him that he’ll have to walk and run and swim. Goku isn’t bothered by this for long, and so he runs off back through the entrance to Baba’s palace. Kame-Sen’nin tells the others they’re running home from here, too, and Bulma screams that she’s not involved in this.

“Of course, Goku went on a journey in search of more strength… And Yamcha and Kuririn trained hard under Muten Rōshi… And so the next three years have passed… Again, the Tenka’ichi Budōkai begins…!!” 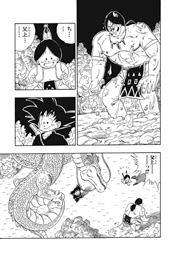 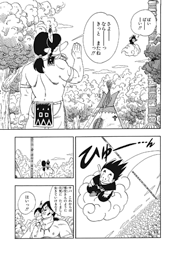 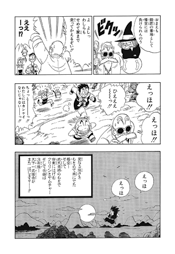