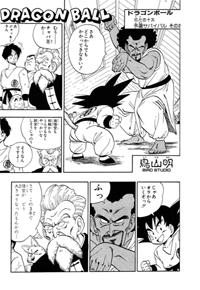 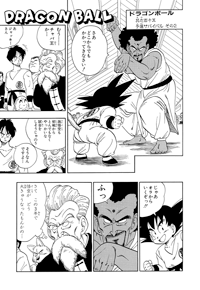 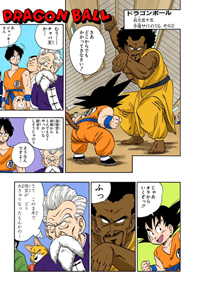 Apparently Jackie’s heard of King Chapa and thinks this’ll be a troublesome match for Goku, even if it’s his first. Goku flies at him and punches him in the face, but it doesn’t knock Chapa down. Yamcha says it’s gotten serious, and Jackie says Chapa’s going to use Hasshuken. Yamcha’s heard of that, apparently you move so fast it looks as if you have eight arms. So, Chapa comes at Goku, but Goku manages to dodge all of his attacks, and he sweep kicks Chapa off his feet. Chapa swings at Goku, but misses, since Goku has jumped up in the air. Goku kicks off the ceiling and dives down at him, then kicks Chapa and knocks him off the platform. The official says it’s #28’s win.

Yamcha and Jackie can’t believe how easily Goku defeated Chapa, and Goku wants to see how strong they’ve all gotten over the years. It’s Jackie’s turn, and he knocks out a bear for the victory. Yamcha says he’s improved since last time, and thinks that this Budōkai has gotten even more amazing than the last one.

The preliminaries continue, with Muten Rōshi’s three students making it into the final eight, along with Jackie Chun. The three of them run outside to greet the others, and Bulma congratulates them. Kuririn asks where Muten Rōshi is, and Bulma says he’s probably off being a pervert in this crowd. “Who’d you say was a pervert!?” Kame-Sen’nin has shown up, and he compliments their work in the preliminaries. Then the PA system calls the finalists back, and so they leave. Oolong says they won’t have a problem seeing everything with Lunch (bad) around. Then Lunch starts firing off her pistol to clear a path through the crowd. 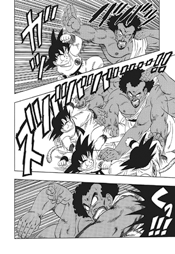 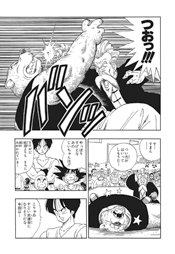 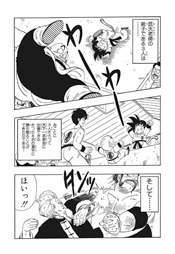