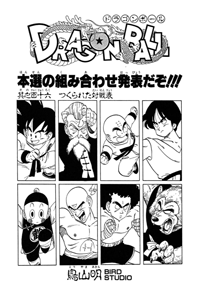 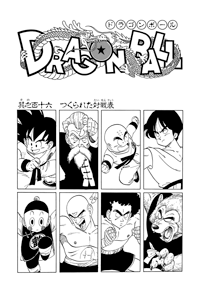 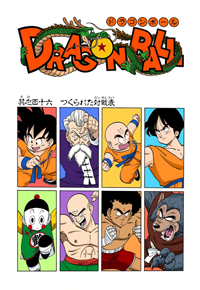 The announcer shows up, and calls all the participants over. “Ossu!” The announcer recognizes Goku, and asks him to please not bust up the arena this time. He explains that they’ll have a lottery to determine opponents and match order, and to come forward when your name is called. First he calls up Jackie Chun, and the three-eyed guy tells Chiaotzu that he was winner last time, and he wants to see him in action first. The three-eyed guy looks over at an angry wolf guy, who apparently has a grudge against Jackie Chun, so he tells Chiaotzu to match the wolf up against Jackie to make it interesting. Jackie draws #4, in the second match, and then Yamcha is called up. The three-eyed guy wants to fight him, so Chiaotzu uses some kind of telekinesis to make him draw #1, the first match. Panput is called up next and Chiaotzu puts him at #7, in the fourth match.

Next is Tenshinhan, the three-eyed guy, and Chiaotzu puts him at #2 so he’ll fight Yamcha in the first match. Next, Kuririn is called, and Chiaotzu puts him at #6, in the third match. Next, the announcer calls Wolf-Man, and the wolf guy yells that it’s Man-Wolf. He explains that a wolf man turns into a wolf at the full moon, but he turns into a human at the full moon. Chiaotzu makes him draw #3, so he’ll fight Jackie Chun in the second match. The announcer calls Gyōza (chaozu is the Chinese reading for gyōza) next, and Chiaotzu corrects him, then draws #5, putting him in the third match with Kuririn. Kuririn’s relieved to be fighting that little guy instead of Goku. The announcer looks at the chart, and says all that’s left is Son Goku, and he’ll draw #8 to be in the fourth match against Panput. “Huh!? How do you know I’ll get #8?” says Goku. He goes and draws, and he’s impressed that he really did get #8.

Tenshinhan makes fun of Kame-Sen’nin’s place, as the announcer explains the rules. “Falling from the ring, being down for a ten count, or giving up is a loss.” Then he prepares to leave, and asks Goku if he wants a meal before the match again, and Goku responds with “Eat, eat!!” Tenshinhan continues to make fun of them for that, and tells Chiaotzu he looks forward to their matches. Kuririn thinks the four of them (Kuririn, Yamcha, Goku, and Jackie) will be the ones to advance to the semifinals.

Out in the crowd, Oolong wonders where the old man is, and Pu’er thanks Lunch (good) for getting them this great spot. But she doesn’t understand, since it was the bad one who got the seats. The gongs suddenly sound and the announcer comes out. “Ladies and gentleman, so sorry to have kept you waiting for such an awfully long time!! But now we’re back, and we’ll begin the twenty-second Tenka’ichi Budōkai!!!” He explains that the one hundred eighty-two contestants in the preliminaries are now down to eight, and that there’s a five hundred thousand zenny prize. “Well then, we’ll begin the first match!! It’s Yamcha versus Tenshinhan!!” They both come out, and the onlookers are amazed at the idea of Tsuru-Sen’nin and Kame-Sen’nin’s students fighting. Tenshinhan and Yamcha both think this’ll be fun. 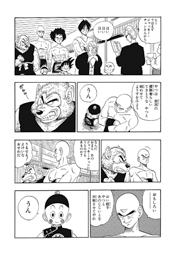 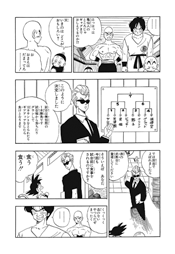 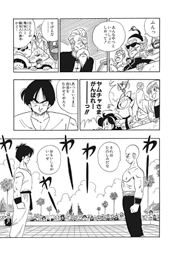