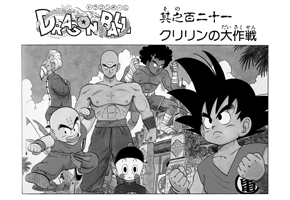 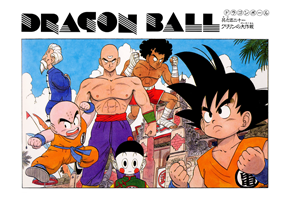 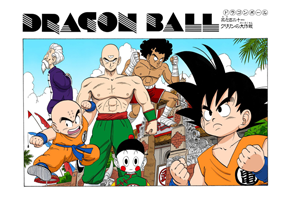 Chiaotzu fires the Dodonpa down at Kuririn while Tenshinhan and Tsuru-Sen’nin smirk, and Jackie’s really worried. “Now!!” yells Kuririn and he jumps up into the air as the Dodonpa hits the ring and causes a big explosion. Kuririn has jumped up to Chiaotzu’s level, where he finally unleashes his Kamehameha and it’s a direct hit. Kuririn celebrates as Chiaotzu hurtles towards the ground outside the ring. But Chiaotzu stops himself and flies back to the ring. Jackie’s impressed with Kuririn’s work, and Kuririn and Chiaotzu stare each other down. Tenshinhan’s pissed that he avoided the Dodonpa.

Kuririn rushes at Chiaotzu with a kick, but Chiaotzu ducks it. So, Kuririn does a vertical kick this time, knocking Chiaotzu across the ring. Kuririn charges after him, but then Chiaotzu holds out his hands and Kuririn freezes in place, clutching his stomach. Tsuru-Sen’nin telepathically tells Chiaotzu not to throw him out of the ring, but to beat the hell out of him. Kuririn curses this Chōnōryoku, and Chiaotzu kicks him into the back wall. Kuririn staggers back up and says his head isn’t a soccer ball. Then Kuririn gets an idea after noticing that Chiaotzu needs to use his hands in order to use his Chōnōryoku.

“3 + 4!?” yells Kuririn, and Chiaotzu needs to count it out on his fingers. Kuririn is free, and he takes the opportunity to slug Chiaotzu in the gut. Chiaotzu regains his composure before Kuririn can strike again, and Tenshinhan’s relieved, while Tsuru-Sen’nin’s pissed. Chiaotzu’s going to counter that: “16 + 27!?” Kuririn knows its 43, then asks “9 – 1!?” Chiaotzu frantically tries to count it out, and Kuririn punches him out of the ring. “Ringout!!! It’s Kuririn’s win!!!” Goku’s excited, Jackie’s pleased, Tsuru-Sen’nin’s pissed, and Kuririn tells Chiaotzu the answer was 8. 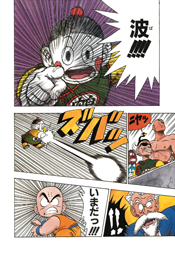 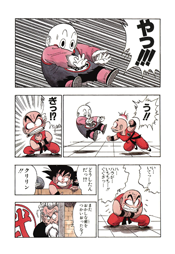 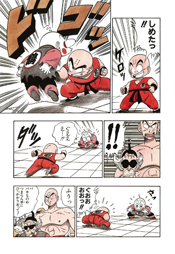