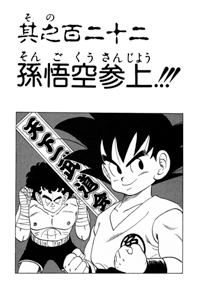 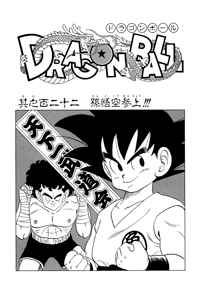 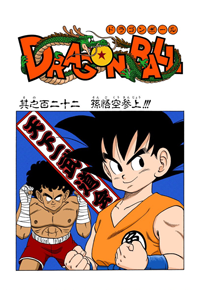 The announcer declares the fourth match is about to begin, and with this, all eight competitors will have appeared. First Panput is called out, and apparently he’s a pretty famous competitor. And, of course, Son Goku was the runner up at the previous tournament. The announcer thinks this’ll be an amazing match. Panput punches at Goku, stopping just in front of his face, but Goku doesn’t even flinch. Panput asks him about that, and Goku says the punch didn’t look that powerful. Panput thinks Goku doesn’t realize how great he is, and asks the announcer for a moment to show him.

Panput starts punching and kicking the air, then does some back flips over to the back wall. Panput elbows the wall, breaking off part of it. He asks Goku if he understands what he’s up against, and Goku says yep. The announcer starts to make his way out of the ring, and Panput tells Goku it’ll only take him thirty seconds to win. The match is called to begin, and so Panput charges at Goku. But Goku just elbows him in the stomach, and Panput falls over. The announcer says that Panput has fainted, so it’s Goku’s win.

The announcer goes on about it being only one hit, but Tenshinhan insists it wasn’t. Tenshinhan explains that while holding off his opponent’s agile punch with his right hand, Goku gave an elbow with his left, which was really three shots in all. Tenshinhan thinks this isn’t an ordinary brat, and that this tournament has gotten a little more interesting. Backstage, Kuririn congratulates Goku on beating that dude who was supposed to be really great. Jackie tells them that that dude was really great, they’ve just become ridiculously strong, and their eyes can see fast movements easily, etc. Kuririn brings up how Yamcha lost, and he himself had a rough time against that chibi. Jackie just says that Tsuru-Sen’nin’s group is also ridiculously strong.

“Well then, from this we’ll carry out the semifinal fifth match!! The first match’s winner, Tenshinhan, versus the second match’s winner, Jackie Chun!!” Jackie heads out to the ring where Tenshinhan is waiting. Tenshinhan thinks to himself that this old man isn’t ordinary. Meanwhile, Kuririn wonders just how strong they (he and Goku) have really become. 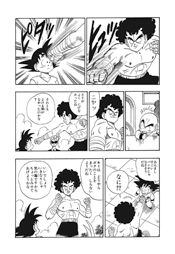 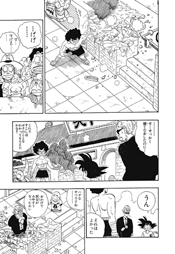 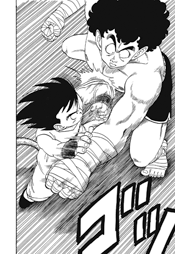