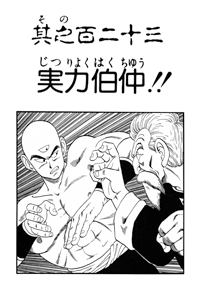 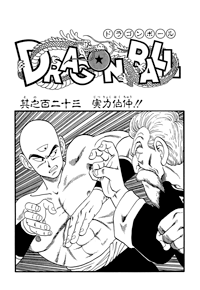 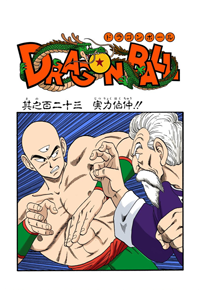 The announcer thinks this will be an interesting match, and calls for it to begin. Kuririn thinks Jackie will win this one, and get revenge for Yamcha while he’s at it, but Goku’s not so sure. Tenshinhan punches at Jackie, but Jackie blocks it. Jackie kicks back at Tenshinhan, but Tenshinhan blocks it. Tenshinhan high kicks at Jackie, and Jackie ducks it, then grabs Tenshinhan’s leg and tosses him across the ring. But Tenshinhan flips over, and kicks off the floor, charging towards Jackie with his arms formed like an “X”. But Jackie jumps over him, then he and Tenshinhan jump back at each other, exchanging a few punches mid-air.

The two of them land with their backs to each other, and then Jackie quickly runs around, surrounding Tenshinhan with a whole bunch of afterimages. Tenshinhan recognizes this as the Multiple Zanzōken. He looks around, and kicks the real Jackie into the wall. He says his three eyes can’t be fooled by tricks like that. Jackie decides to throw off his jacket, and Tenshinhan flies at him, asking if he can see the movements of his hands (he’s flailing them). Jackie does, and grabs each arm by the wrist, then knees Tenshinhan in the gut. Jackie then kicks Tenshinhan up into the air, and Tenshinhan’s pissed when he lands.

Tenshinhan rushes at Jackie again, this time getting in a knee to the chest and a punch to the face, knocking Jackie down. Jackie kicks back up, and delivers a slobber-knockin’ punch to Tenshinhan’s face. They break away from each other, and the onlookers are in awe as Jackie and Tenshinhan each wonder about the other. 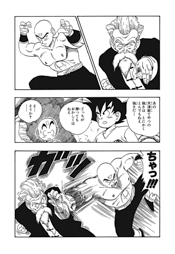 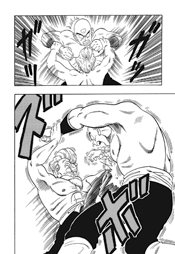 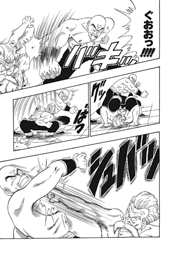