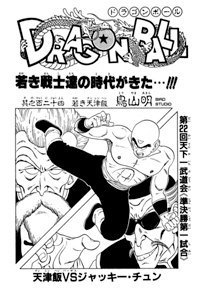 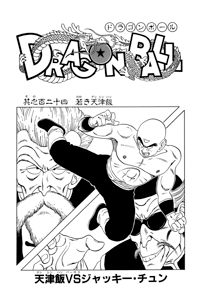 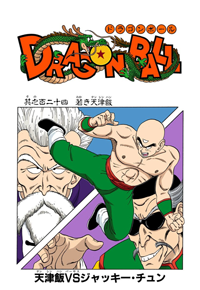 Jackie starts talking about Tsuru-Sen’nin, and Tenshinhan tells him he’ll be sorry for talking bad about his teacher and says he’ll be getting serious. “What!? Are you saying you weren’t serious up until now?” asks Jackie. Kuririn thinks it’s a bluff, as Tenshinhan holds his hands in front of his face, with the backs of his hands facing out, thumbs closed in, and the other eight fingers spread apart. Tenshinhan announces his new Tsuru-sen technique, the Taiyō-Ken, and he unleashes a flash of light that blinds everyone who isn’t wearing sunglasses.

Tenshinhan runs over and knees Jackie in the back of the head, knocking him out. The announcer begins the count as Goku and Kuririn slowly open their eyes again. Jackie gets back up at five, surprising Tenshinhan, and Jackie asks if he couldn’t have pity on an old man whose eyes are already going bad. Tsuru-Sen’nin wonders about Jackie, and Tenshinhan asks who the hell he is. Jackie asks why a guy like him is involved with Tsuru-Sen’nin, and says he should think about choosing the light over the shadow. Tenshinhan yells out that if he keeps talking crap, he’s going to shut his mouth for him, and begins to run towards Jackie.

Tenshinhan punches at Jackie, but Jackie blocks it, then Tenshinhan gets in a kick to the face. Jackie asks him if he’s getting confused, and Tenshinhan can’t believe he’s still talking. Goku wonders how the announcer was able to call the knee strike when it was all bright before, and the announcer points out his sunglasses to Goku. Jackie continues going on about Tsuru-Sen’nin being bad, and then Tsuru-Sen’nin realizes who Jackie Chun really is. He telepathically tells Tenshinhan this old man is Kame-Sen’nin in disguise. Jackie realizes his secret’s been exposed, at least to those two.

Tenshinhan decides he’ll show him an interesting counter, and Jackie asks if he maybe means an etchi book. Tenshinhan yells at him, and then starts his attack. “Ka… me… ha…” Kuririn, Goku, and Jackie are all shocked. “Me… Ha!!!” Tenshinhan fires a huge Kamehameha, and Jackie yells out that he’ll kill the audience. Jackie holds out his hands to catch the Kamehameha and diverts it up into the air. Tenshinhan says that’s a standard technique, and he can easily make things like that his own by watching them being performed just once.

Jackie says some more stuff about walking the bright path, and then walks over to the edge of the ring and hops out. Everyone’s shocked as Jackie hops back in the ring to grab his jacket and go backstage. Tenshinhan asks him why as he heads back, but Jackie just hums along and ignores him. Tsuru-Sen’nin thinks he was scared, but Tenshinhan thinks otherwise. Backstage, Jackie wonders what kind of era it’ll be from now on (him letting the youngsters do this). 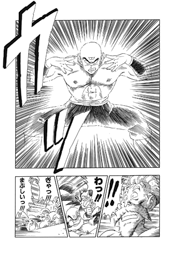 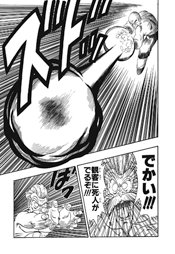 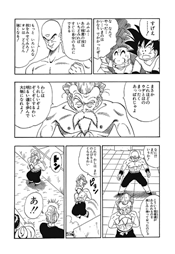