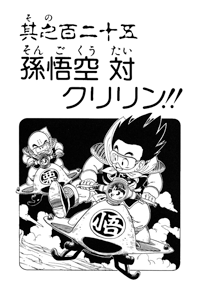 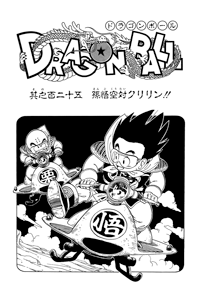 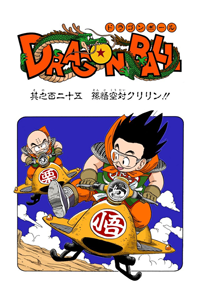 It’s time for the sixth match to begin between Kame-Sen’nin’s two students, Son Goku and Kuririn, with the winner going on to the finals against Tenshinhan. Kuririn suddenly realizes the two of them will be fighting, and freaks out, but Goku’s excited about them fighting for the first time. They each promise to do their best and head out to the ring. Meanwhile, Jackie is backstage changing back into the suit and hat he wore to the arena, and Tenshinhan shows up as he puts on his sunglasses. He asks about the disguise and Kame-Sen’nin tells him it’s for the benefit of his students. Tenshinhan says he must have given up after realizing none of them can beat him.

“Well then, please begin the second match!!” Kame-Sen’nin tells Tenshinhan that none of his students are foolish enough to think they’ll win every fight. Kame-Sen’nin prepares to walk off, saying Tenshinhan is the same and he’ll end up on the right path. Tenshinhan decides to tell him about a good thing: he aims to take Tao Pai-pai’s place as the world’s number one hitman. Kame-Sen’nin shrugs that off and leaves, wishing him a good match, and admits that if they would have continued their match, he would have lost. Tenshinhan thinks the old man has no pride, admitting that he’s weak.

Kuririn kicks at Goku, but Goku blocks it, then Goku blocks Kuririn’s punch. Goku kicks at Kuririn, and Kuririn jumps over it, then kicks at Goku mid-air, but Goku blocks it. Kuririn lands, then Goku rushes at him and whacks him in the face. Kuririn jumps back and looks up to see that Goku’s gone. Out of nowhere, Goku kicks Kuririn, then gets in a few more kicks that Kuririn just barely blocks. Then Kuririn strikes at Goku, and they break. They talk a bit before Kuririn rushes at Goku with an elbow to the face, then a kick across the ring. Kuririn rushes after Goku, but Goku jumps into the air. So, Kuririn jumps up after him, and gets a look at the sun. Kuririn tilts his shiny bald head just right, and flashes some sunlight in Goku’s eyes. Then Kuririn kicks Goku down towards the ring, but Goku lands on his feet rather than crashing. 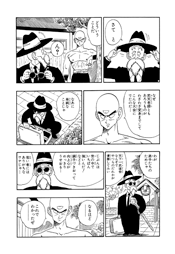 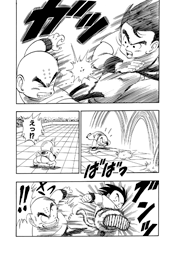 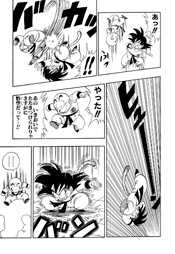