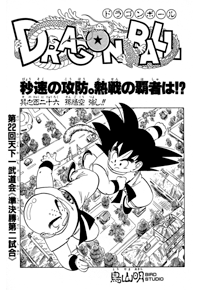 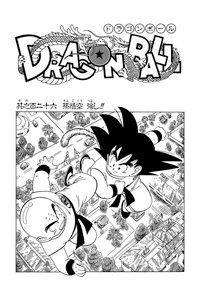 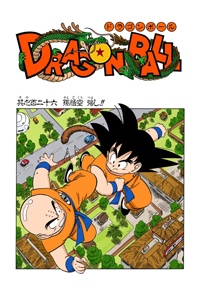 Kuririn is still coming back down and Goku decides to jump up and attack him for the win. Goku jump kicks up towards him, so Kuririn sucks in a bunch of air. Kuririn’s all puffed like a blow fish now and he floats up just over Goku’s kick. Kuririn deflates and lands safely, as Goku kicks off the backstage wall and lands as well. Goku compliments Kuririn, and says this is his first fun fight. They’re both excited, and Kame-Sen’nin is watching from the back of the audience (standing on his staff to get a good view). Goku then rushes at Kuririn, yelling out “Ka-me-ha-me…” along the way. Just as Goku gets in front of Kuririn, he jumps up into the air and yells “Ha!!!!”, but fires the Kamehameha off into the air instead of at Kuririn. It propels Goku toward Kuririn and he punches him in the face, and then knees him in the gut.

Everyone’s shocked at Goku’s ferocity, but Kuririn eventually gets back up at the count of three. Kuririn says that wasn’t a fun attack, and gets pissed and prepares to unleash his counterattack. Kuririn rushes at Goku, but Goku easily pops him on the back. When Kuririn gets back up, he runs across the ring and thinks a bit. Then he prepares to unleash a Kamehameha, and Goku tries to tell him that won’t work against him. Goku simply holds out his hand and the blast explodes on his hand. “See! Useless, don’t you think?” But Kuririn’s gone, and he suddenly appears behind Goku. Kuririn grabs his tail, calling out how it’s his weak point. Tenshinhan wonders about this weak point business and Kame-Sen’nin’s impressed with Kuririn’s strategy. 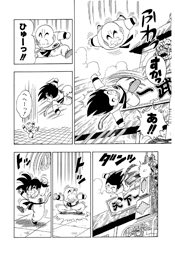 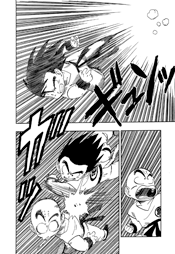 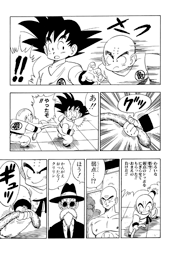