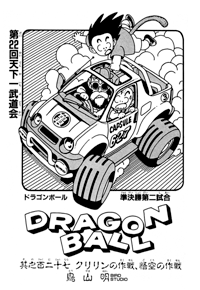 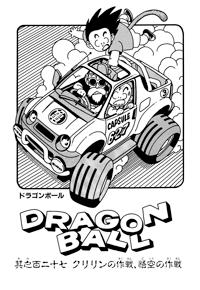 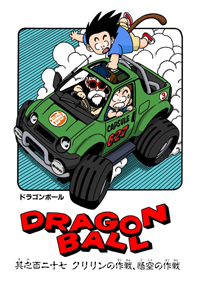 Kuririn laughs about this turnabout as Goku slowly loses his strength. “Whoooooa, contestant Son is down!! What in the world could be wrong!?” Tenshinhan thinks this is rather unexpected, and laughs about how fighting that Kuririn guy will be an easy victory for him. Goku suddenly gets up just as the count reaches nine and jumps over Kuririn’s head while he’s still holding his tail. Then Goku slams Kuririn down using his tail, and explains that he trained his tail just like Kame-Sen’nin had suggested. (Except that it was his dead Grandpa who said it, not Kame-Sen’nin.) Kame-Sen’nin ponders this turn of events, and says that Goku now has no weak point.

Kuririn does the old “look over there” gag, and elbows Goku in the face when his head is turned. Kame-Sen’nin says he does have a weak point after all — he’s too docile and honest. Goku then vanishes from sight. Kuririn frantically looks around, but he can’t find Goku, nor can anyone else; except Tenshinhan, who thinks to himself that he hasn’t disappeared, they just can’t see him because he’s going ridiculously fast. Goku suddenly appears in front of Kuririn sticking his tongue out, freaking Kuririn out, and then Goku whacks Kuririn, tossing him out of the ring. “Ring out… I-it’s contestant Son’s win…”

Everyone’s surprised by the turn of events, except Tenshinhan. Tsuru-Sen’nin and Kame-Sen’nin each wonder about Goku as well. The announcer asks Goku if he’d like to have a recess before the finals, but Goku declines. “Now, ladies and gentleman, at last the greatest martial artist in the world will be decided!! It’s the finals!!! As expected, the honor of the greatest in the world and a five hundred thousand zenny prize will be waiting for either Tenshinhan, or perhaps Son Goku. Surely this will be the can’t-miss match of the century!!!” Kuririn tells Goku not to lose, and Tenshinhan thinks this should be fun. 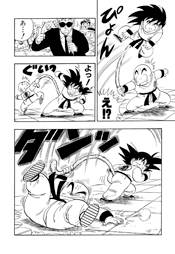 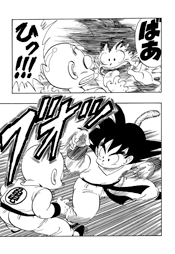 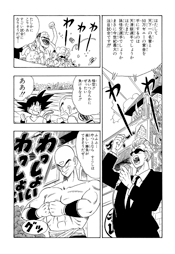