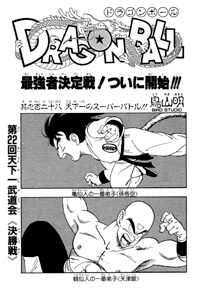 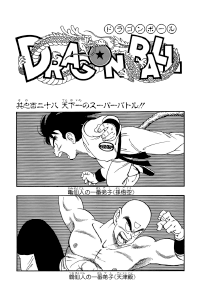 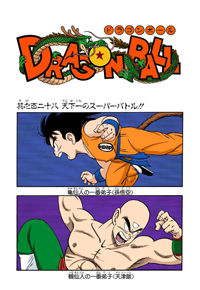 The announcer goes on about how the Twenty-Second Tenka’ichi Budōkai has gone from a hundred eighty-two participants down to just two — Tenshinhan and Son Goku. Kame-Sen’nin wants a closer look, so he runs through the audience and heads over behind the back wall next to the ring where Kuririn is watching. Kuririn tells him only contestants are supposed to be back here, but Kame-Sen’nin’s unconcerned. Tsuru-Sen’nin and Chiaotzu watch in the audience, with Tsuru-Sen’nin thinking of how Tenshinhan can’t lose to Kame-Sen’nin’s student, for Tao Pai-pai’s sake.

Tenshinhan smirks and comes back down to the ring, and then Goku shoots up from under the ring. Goku suddenly kicks off the ring when he lands, and rushes at Tenshinhan. Goku does the same super-speed trick he used against Kuririn where he appears to have vanished, but Tenshinhan pays attention to the sounds of Goku’s movements and whacks Goku hard, knocking him across the ring. “Do you think a child’s trick like that would work against me?!!” Tenshinhan charges after Goku, elbowing him into the back wall, and then Tenshinhan repeatedly strikes at Goku up against the wall. Kame-Sen’nin says that attack’s like a machine gun, and then Tenshinhan clubs Goku down off the wall. Tenshinhan holds the faint Goku up with one hand, and asks him if he’d like to go to Heaven or Hell. 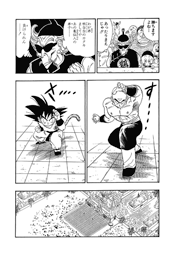 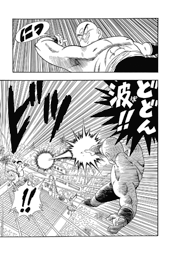 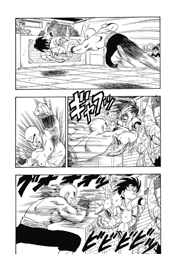