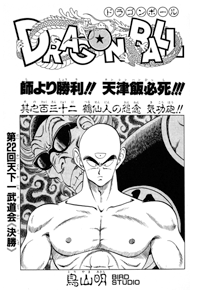 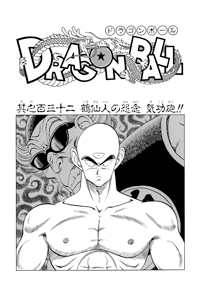 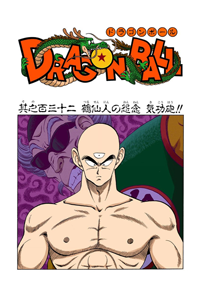 Tenshinhan continues about just wanting to fight the match on his own, and Goku thinks he’s a good guy after all. Tenshinhan then repeats what he said in the last chapter about preparing for this next attack (word for word), and Chiaotzu repeats his asking Ten-san if he plans on doing “that”. Goku gets ready for it, as Tenshinhan spreads his arms out and begins powering up. Everyone wonders what he’s up to, and Chiaotzu excitedly exclaims, “It isn’t!! It’s not the Kikōhō. It’s the Shiyō-ken!!” Two humps form in Tenshinhan’s back, and then, two extra arms pop out!

Everyone is freaked out (the announcer even drops his microphone), as Tenshinhan tells Goku he can punch twice as much now. Tenshinhan comes at Goku, and Goku blocks Tenshinan’s front arm strikes. But Goku only has two hands, and Tenshinhan clubs Goku in the back with his back arms. Goku hops away, rubbing his back, and then Tenshinhan comes swinging at him again. Then Tenshinhan grabs one of Goku’s limbs in each of his four hands, holds Goku over his head, then brings Goku down for a fierce headbutt to the kid’s gut. Goku then counters this by whacking Tenshinhan in the face with his tail, and then he jumps free.

Tenshinhan’s pissed about that, and Goku says that he’ll counter the four arms by having eight arms. Goku starts waving his arms really fast, making it seem as though he has eight arms. Goku runs over and starts punching Tenshinhan, and Tenshinhan can’t do much to counter. Goku punches him in the face, and then kicks him into the air. Tenshinhan lands, pissed, and retracts his third and fourth arm.

Tenshinhan decides to give Goku a warning: “If I directly use this technique on you, even someone as skilled as you will unmistakably die!! I don’t want to kill you!!! So, avoid this!!! You have to avoid this!!!” Kame-Sen’nin wonders about this, as Chiaotzu cries out, “It’s the Kikōhō!! T-Ten-san, stop it!!” Kame-Sen’nin also yells out objections, asking Tenshinhan if he wants to die.

Kame-Sen’nin explains to Kuririn how the Kikōhō is a destructive technique levels greater than the Kamehameha, and it consumes so much energy that even the user will die. Kame-Sen’nin curses Tsuru-Sen’nin for teaching him that technique. Chiaotzu continues crying out for him not to do this, but Tenshinhan insists he won’t have to die. Tenshinhan flies up into the air, but Goku says he refuses to run away. Kame-Sen’nin yells at Goku not to be stupid and do like he says, but Goku ignores him. “Here goes!!” says Tenshinhan as he looks down at Goku, who prepares to take whatever Tenshinhan has to offer. 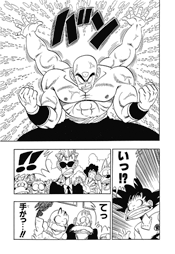 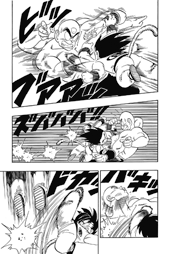 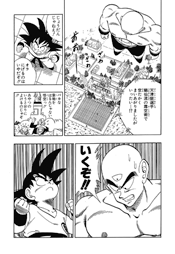