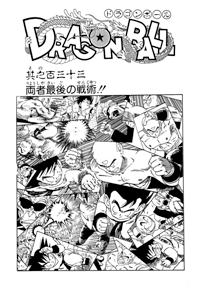 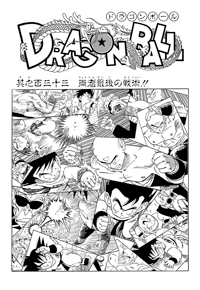 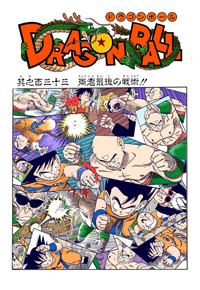 Tenshinhan keeps shouting down at Goku to avoid this, but Goku is unmoving. Kame-Sen’nin continues objecting, while Chiaotzu pleads to Ten-san not to die. Tenshinhan looks down at Goku and says “Here goes!!”, and Goku stands ready to take it (the same two panels). Tenshinhan folds his hands in front of himself with the index fingers up, and starts powering up. Then he pulls his hands apart, and they start charging up. Kuririn asks about his hands glowing, so Kame-Sen’nin explains that Tenshinhan is focusing all the ki in his body.

Tenshinhan puts his hands together in a triangle form. “The target… is the ring!!” Tenshinhan thinks he’ll completely use up all of his ki and deplete his strength, and then, “KI-KŌ-HŌ!!!!” There’s a huge flash and explosion. Tenshinhan pants as he looks down at the ring, just as Kuririn and Kame-Sen’nin notice the damage. The announcer is shocked as well. “T-the ring is… gone!!!! W-what in the world is this, h-how… T-the ring was just here a moment before. I-it’s completely disintegrated…!!!!” There’s just a huge hole in the ground where the ring was. Where Goku was…

Kame-Sen’nin is impressed with the Kikōhō, but Kuririn is more worried about Goku having been disintegrated as well. Kame-Sen’nin doubts he’s dead, and then Tenshinhan notices something and flies up. It’s Goku! Tenshinhan is impressed with Goku for having jumped all the way up here just in the nick of time. Goku compliments his technique, saying he’d have died if he hadn’t gotten out of the way. The announcer looks up at the two of them with some binoculars, continuing to call the match.

Gravity is getting the better of Goku, and with there being no more ring, or earth where the ring was, simply touching the ground would constitute a ring-out now. Therefore, the first one to fall loses. Tenshinhan talks about how he can freely fly with Bukūjutsu, so the outcome is pretty obvious. But Goku says he’s going to try one last attack with all of his remaining strength. Tenshinhan thinks Goku’s wasting his time, but Goku says Tenshinhan should be worn out from his attack. Goku starts up a Kamehameha, and Tenshinhan just laughs about this. But then Goku does an about face, firing off a pretty big Kamehameha, so that it propels him toward a worried Tenshinhan. 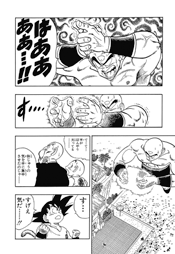 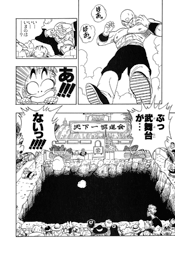 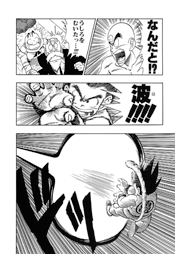