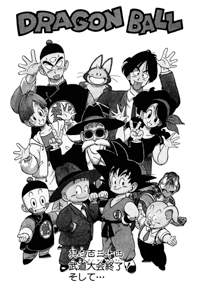 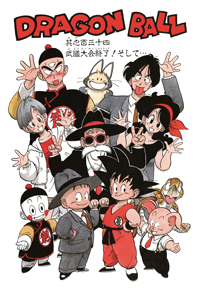 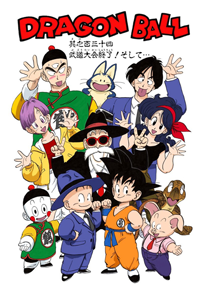 The Martial Arts Tournament Concludes! And Then…

Goku continues flying straight at Tenshinhan, and hits him with a hard headbutt to the gut. So, now Tenshinhan is falling at an angle off into the city, away from the arena. Although, Goku is falling at the same angle a bit behind Tenshinhan, since the Kamehameha used up so much of his strength, he can’t really move his body. The announcer throws out a capsule and out pops a cute little shark-decorated vehicle. He hops on, and then zooms off to go continue calling the match.

Goku and Tenshinhan are much closer to the ground now, and so Goku manages to fire off a little Kamehameha to slightly increase his altitude. The announcer calls this, and, on a radio in the hospital, Yamcha, Pu’er, Bulma, and Lunch hear it and get excited. Kuririn’s relieved back at the arena as well. But, suddenly… A truck drives down the street, right in Goku’s path, and Goku hits the truck, bouncing off and crashing into the street. Tenshinhan crashes just afterwards. “Contestant Tenshinhan has won!! He’s won!! Contestant Tenshinhan- is determined the greatest in the world!!” Chiaotzu is happy to hear this, while everyone else is shocked.

Some time passes after the finish and the announcers bids all fans farewell. “Well then, let’s all meet up again after three years. Goodbye!!” The whole gang is together now, along with Tenshinhan and Chiaotzu. Goku changes into Kuririn’s less tattered dōgi, since he has nothing else to change into, unlike everyone else. Tenshinhan offers Goku half the prize money, but Goku declines (he wouldn’t know what to do with money). Tenshinhan insists he only won by luck, and is feeling a bit humbled.

Like last time, Kame-Sen’nin suggests they all go out to eat. Tenshinhan thinks he could at least pay with his prize money, and Kuririn tells him he’ll regret that (because of Goku’s unbelievable appetite). “Ah, we can’t go!! Where’s Grandpa’s Dragon Ball and my Nyoi-Bō?!” Kuririn offers to go to the backstage house thing and get them for Goku, as Yamcha (on crutches because of his leg) and Tenshinhan somewhat make up. Kame-Sen’nin offers to let the two of them come train at his place, and Lunch highly agrees (she says she’s fallen in love with Tenshinhan because he’s so wild). But Tenshinhan declines, since they’re still Tsuru-Sen’nin’s students despite it all. He and Chiaotzu will go live somewhere.

Suddenly, there’s a loud scream from inside the backstage house, and Goku recognizes it as Kuririn’s voice. Everyone runs in, and Kuririn’s down, as is the announcer. Kuririn’s out, but the announcer’s still awake. The announcer weakly says a monster came in and took a weird ball and the Budōkai name registration list. Kame-Sen’nin wonders about that, when Goku shouts that Kuririn is dead. Someone killed him! 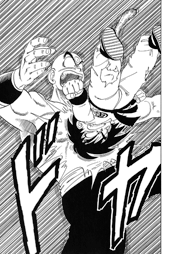 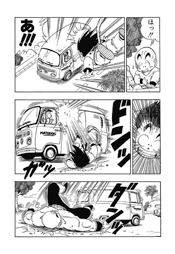 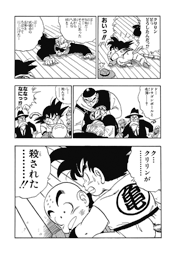