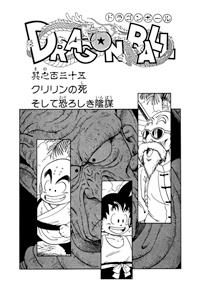 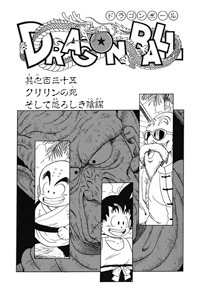 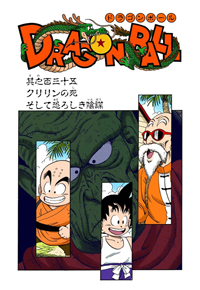 Kuririn’s Death, and a Terrible Conspiracy

Goku kneels over Kuririn, while everyone else starts to tear up at the news. Except Kame-Sen’nin, who wonders about this monster, and what it’d want with Goku’s Dragon Ball and the contestant name registration list. Goku then stands up, incredibly pissed, and he asks Bulma if she has the Dragon Radar as he straps on his Nyoi-Bō. Kame-Sen’nin yells at Goku to wait, but Goku ignores him, snatching the Dragon Radar from Bulma and calling Kinto-Un. Goku whooshes off, and the radar says there’s two balls nearby, so he heads for the one that’s moving.

Kame-Sen’nin thinks Goku was stupid for leaving like that, since he’d already used up all of his strength in the Budōkai. Then Oolong finds a piece of paper, and Bulma looks it over, thinking this looks bad, since it has the kanji for “demon” (ma) written on it. Kame-Sen’nin quickly runs over, and when he sees it he really starts to worry. Kame-Sen’nin cryptically explains that this is Demon King Piccolo’s logo. Tenshinhan has heard of this Daimaō person.

Kame-Sen’nin says that even though he has a cute name, Piccolo was a terrible guy. He was a monster with overwhelming strength, and he turned peaceful worlds into worlds of death. When Kame-Sen’nin and Tsuru-Sen’nin were younger, they were both students of Mutaito. Mutaito used a secret technique known as the Mafūba to contain Piccolo in a Denshi Jar. Though, in turn, using the Mafūba cost Mutaito his life. To ensure that Piccolo wouldn’t be revived, Kame-Sen’nin personally put the Denshi Jar in the bottom of the ocean.

Chiaotzu worries that maybe Tsuru-Sen’nin brought Piccolo back, but Kame-Sen’nin insists Tsuru-Sen’nin knows better than that. Yamcha is worried about Goku facing Kuririn’s killer, and then Tenshinhan asks just how Goku is going to find that monster. Lunch says he has the radar to find it, and Tenshinhan wonders about that, along with the “Whatever-Ball”. Kame-Sen’nin just wonders what Piccolo would want with the Dragon Ball and the Tenka’ichi Budōkai name registration list.

Up in a black airship, there’s this wrinkly old green guy with pointy ears and antennae, with the demon kanji on his outfit, and he’s sitting in an eerie throne; obviously Demon King Piccolo. He has a little pterodactyl-looking guy for a henchman (Piano) right next to his throne. Piccolo is thinking about how he can get any wish granted if he gathers all seven balls, and laughs. Pilaf asks Daimaō if he plans on wishing for world domination, but Piccolo just laughs, and explains that he wants eternal youth. Then he’d have his strength back and he can just take over the world all on his own.

Pilaf brings up how he found him and freed him from the Denshi Jar and told him the secret of the Dragon Balls, and Piccolo wants Pilaf to just come out with it. Pilaf asks for half of the world, and also mentions how he explained about the greatest martial artists gathering at the Tenka’ichi Budōkai. Piccolo says nothing, so Pilaf retracts his request to a third, or maybe just a fourth of the world. Piccolo says he’ll think about it.

Then Piccolo looks down at the Denshi Jar, thinking about those martial artists. “Boom!” Piccolo blows up the rotting old Denshi Jar with an eye beam attack, and notes that they plan on finding all the great martial artists who could be capable of doing that containment technique. Back at the Budōkai, Kame-Sen’nin realizes why Piccolo wanted the name registration list — one of the great experts on that list could possibly perform the Mafūba to seal him up again. Tenshinhan says he probably intends to kill all the martial artists on that list, and Kame-Sen’nin agrees. Meanwhile, Goku catches up to Piccolo’s monster henchman… 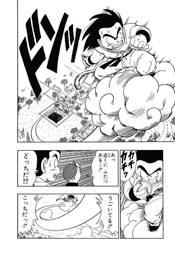 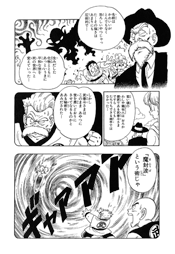 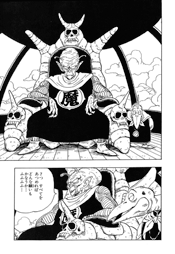