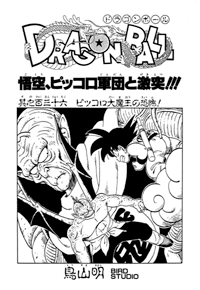 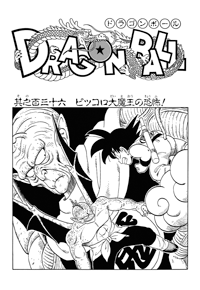 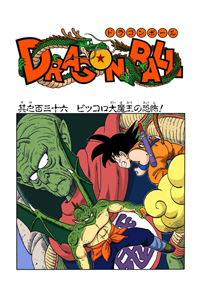 The Terror of Demon King Piccolo!

The monster, a winged, half-clothed creature, spots Goku approaching. He’s holding the name registration list in one hand, and when Goku spots the Four-Star Ball in the other, he becomes enraged. “Give me back my Dragon Ball and Kuririn’s life!!!!” The demon thinks this Kuririn must be the brat who defied him, and laughs about how easily he died. “You’re Kuririn’s enemy…! I’m gonna attack and kill you!!”

The demon isn’t worried, and asks what kind of return attack he has. Goku swipes at him, but the demon jumps over it, then kicks Goku off of Kinto-Un. But Kinto-Un quickly whooshes down and catches him, and Goku’s angry about having used up all of his strength at the Budōkai. Goku yells at the demon that if his belly was full… But the demon says his mouth is plenty full, and decides to shut it permanently. The demon fires a blast from his mouth, missing Goku, but blowing up Kinto-Un. Then he hits Goku down toward the ground, and Goku crashes into a little jungle below.

It’s night outside now, and back at the Budōkai, everyone is still waiting for Goku. Yamcha’s annoyed, and he says that they’re sure to be targeted next. Oolong isn’t worried, since he’s uninvolved, but Bulma yells at him that it’ll be bad for everyone if Piccolo takes over the world. Tenshinhan asks about the Mafūba, but Kame-Sen’nin dismisses the idea. The announcer figures it wouldn’t do any good to call the police, and Kame-Sen’nin tells him it’d just cause a panic. Then Kame-Sen’nin asks the announcer to tell Goku they’ve gone home if he should return. Tenshinhan and Chiaotzu are welcome to come as well. Oolong is worried about his future, and Lunch yells at him that it ain’t just about him.

It’s daylight again, I guess the next day now. Up in the airship, the demon hands the Four-Star Ball over to Piccolo. Then he gives him the Budōkai name registration list, which tells the names of the participants over the past ten years. The Dragon Ball was also on the Budōkai grounds, so it was “two birds with one stone”. Piccolo tells him to put them up on the wall (there’s a poster for each person, photo, address, and statistics), and Pilaf’s gang volunteers to help.

Namu, Ran-Fan, and then the demon gets to the Kuririn poster, and says there’s no need to put up this one, he’s already dead. Mai points out a certain page to Pilaf, and they freak out, because it’s you-know-who. He’s participated twice, and was the runner up both times. The demon says there’s no need to put that one up either, because he killed him, too. Pilaf’s gang can’t believe it, but the demon insists he’s dead. The demon says if a person like that was runner up, then the martial artists in the world now must not be much. Still, Piccolo doesn’t want to be careless. Pilaf hadn’t realized this person they freed was so powerful, as Goku lies face down on the jungle floor. 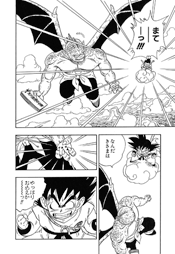 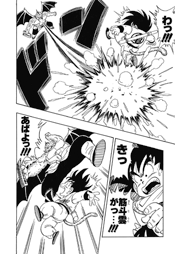 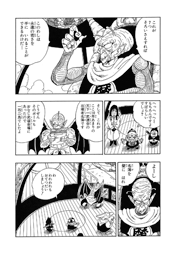