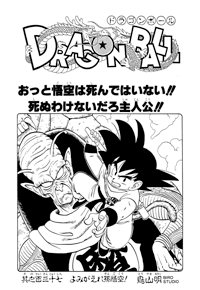 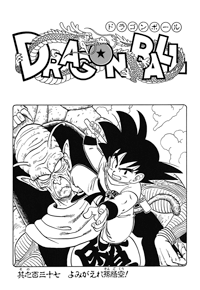 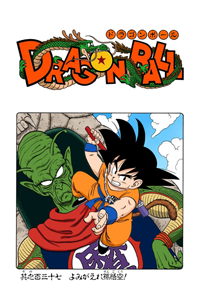 Piccolo thinks of his restored youth, and then calls on the demon, addressing him as Tambourine. He tells Tambourine to go obliterate the expert martial artists, and the pterodactyl-looking guy asks who’ll gather the Dragon Balls. Piccolo says he’ll increase the number of warriors, and Pilaf thinks he’ll lose his lunch if he does that again. The pterodactyl-looking guy advises against producing an egg again in his state, but Piccolo insists it’ll be alright, his youth will soon be restored by the Dragon Balls. So, Piccolo tries to think of a name for a Dragon-Type warrior to gather the Dragon Balls. Then, Piccolo starts some chanting, and he… coughs up a huge egg.

Piccolo tells this one his name is Cymbal, and tells him to wake up. A fat dragon pops out, with wings just like Tambourine, and Piccolo tells Cymbal he needs to gather the six remaining Dragon Balls. Piccolo asks Pilaf where the next Dragon Ball is, so Pilaf points it out on the giant radar globe. Cymbal notes the spot on the globe, as Tambourine decides on his next kill — Namu. Then both Cymbal and Tambourine fly off. Shuu is worried that they won’t be able to trust Demon King Piccolo, but Pilaf assures him, and Mai, that he’ll be getting half the world.

At Kame House, the concept of the Dragon Balls has apparently been explained to Tenshinhan and Chiaotzu. Bulma says the wish they need to make is to return Kuririn to life. Yamcha thinks about how it’ll be bad if Piccolo makes a wish instead, with Pu’er saying how they can’t revive Kuririn for a year’s time. Oolong brings up that if they brought Kuririn back after that long, he’d just be a zombie. Which is why Bulma is going to make a refrigeration capsule. She asks Oolong if he wants to get in one, too, and Oolong just says he’s alive.

Kame-Sen’nin starts mumbling to himself. “Hmm… Light gray…” Yamcha asks him what sort of plan that’s supposed to be. “No, Bulma’s panties.” (Bulma’s wearing a skirt and sitting on the couch in a position that could reveal such a thing.) Bulma gets pissed and yells at Kame-Sen’nin, then beats him up. Then Lunch points out something on the TV: a news report about the death of Namu. There was a “demon” paper left behind again. So, they all realize the other participants are in danger as well, not just them. Tenshinhan’s pissed that there’ll be a worldwide panic.

Kame-Sen’nin asks Bulma how long it’ll take to make a new radar, and she says hurrying, it’ll take half a day. So, everyone flies off in a plane, apparently without Bulma. Meanwhile, off in the jungle, Goku slowly wakes up! He smells some food, and quickly runs over to find a huge fish roasting over a fire. 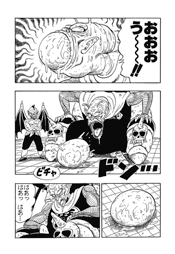 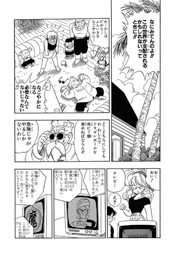 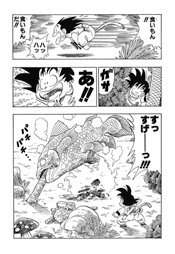